“Do you know where we pay the departure tax exit fee?”

As we awaited our flights out of Cuba, the German tourist approached me at Havana’s Jose Marti International Airport asking about the so-called departure tax. He said his Lonely Planet guide instructed him to save $25 Cuban dollars (CUC) to cover the exit fee, and now he couldn’t figure out where to make this payment.

Navigating the ins and outs of visiting Cuba can be difficult, like figuring out how to get wifi access, dealing with crime concerns, and finding lodging in a casa particular. The question of where to pay the departure tax at the airport was just another concern that international travelers have to figure out.

Do you need to pay a departure tax to leave Cuba?

For many years, whenever you boarded a flight out of Cuba, you had to pay a fee of $25 per person at the airport. This sometimes caused problems for unaware tourists, since the fee had to be paid in Cuban money, and it had to be paid in cash. An unexpected charge is not a welcome surprise when you show up at the airport to fly home!

But thankfully, they did away with this fee in May 2015, rolling the necessary departure fees into the price of the flight. Every flight departing Cuba now follows the new policy. So no matter which airline you’re traveling on, or what country you’re heading to, you will NOT be required to pay an exit fee.

I informed the German dude that he did not have to pay to leave Cuba. He was actually a little disappointed! Because he and his girlfriend had set aside $50 in Cuban money to cover this fee, and now they didn’t need it. At that point, they were already beyond security and the currency exchange, so they had no way to switch their cash back to Euros.

As the guy shrugged, I pointed to the tiny restaurant counter in the terminal and suggested he could at least buy water and snacks. That was better than losing his $50 entirely!

I think the real lesson here is this: Travelers should trust travel blogs instead of outdated Lonely Planet books 🙂 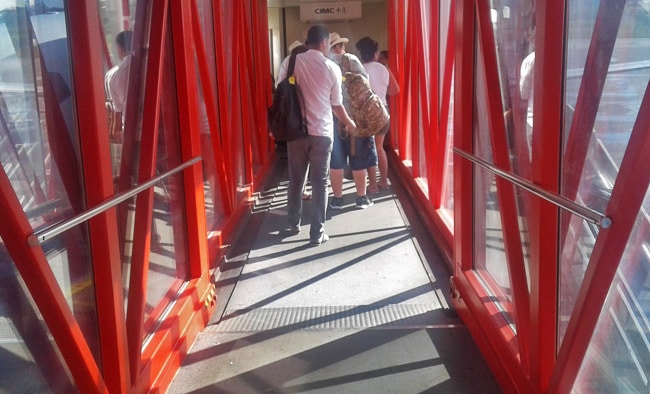 Summary: The Cuban airport exit fee is no longer required

So, how much does it cost to leave Cuba? To sum up: As of this writing in 2023, visitors to Cuba do NOT have to pay anything to leave the country. Any such fees were already paid in the cost of your flight.

The exit fee is no longer a thing. That’s one less thing to have to worry about when you’re in Cuba!

If you plan wisely, you can spend up all of your Cuban cash, then head to the airport with no Cuban money left, and you will have no problems departing the country. Worst case scenario, you have to go home with extra Cuban cash in your pocket, which you can turn into a souvenir of your trip.