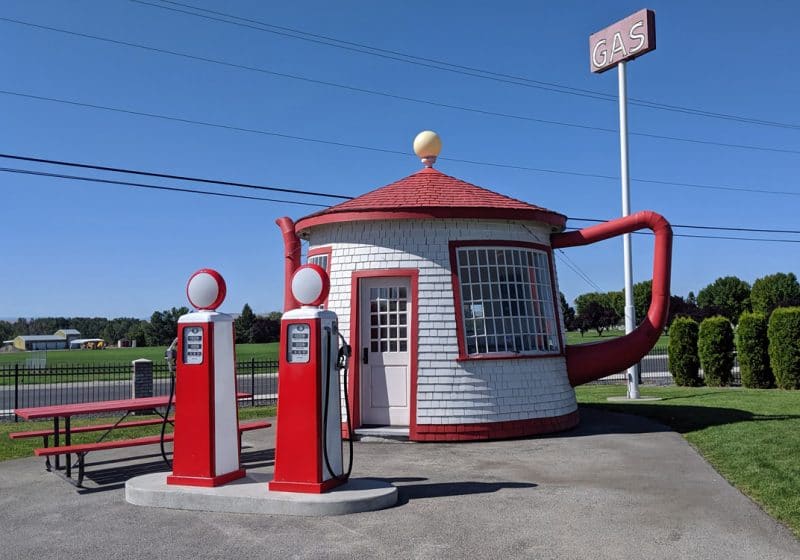 The town of Zillah, Washington is home to an old gas station turned visitor center whose construction was inspired by a scandal involving President Harding in the 1920s. How’s that for a weird story?

The Teapot Dome Service Station, aka the Teapot Gas Station, is a fun roadside attraction in central Washington. It’s a century old (built in 1922) and has been listed on the National Register of Historic Places since 1985.

If you’re traveling this part of the country, you’ll want to swing by for a visit! Here’s the story of how the teapot gas station came to be, how it’s been moved over the years, and where you can find it now.

What You’ll See at the Teapot Gas Station 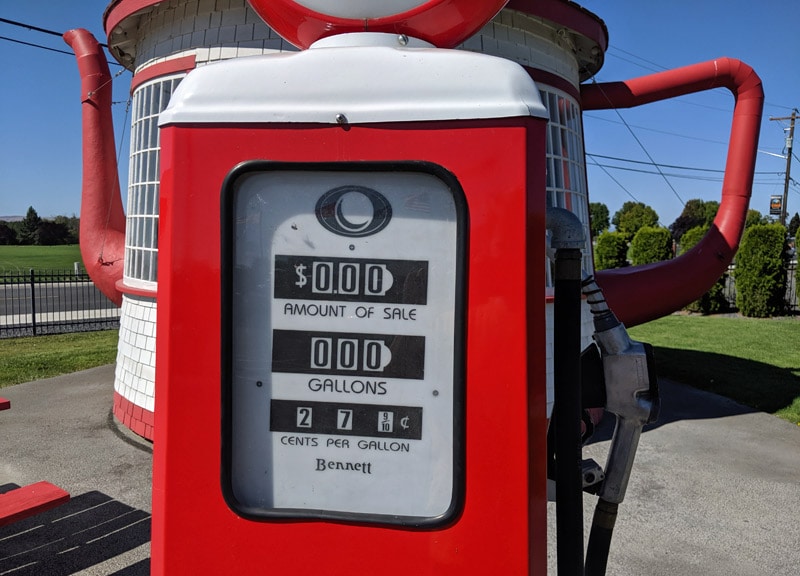 The giant teapot is 14 feet in diameter and rises 13 feet tall, with a conical base, a roof serving as the “lid,” a handle made of sheet metal, and a spout made of concrete. It’s brightly colored with white paint and red accents. Fun fact: the spout used to serve as a stove pipe in cold weather.

In front of the teapot are red picnic benches, plus two old-timey gas pumps and an old air pump. The gas pumps show a current price of 27 cents per gallon. If only fuel was that cheap today!

The teapot has a front door. The facility now serves as the Zillah Visitor Center, so you can stop in during business hours for information and brochures about attractions in the area. You can also buy souvenirs such as books, postcards, tshirts, Christmas ornaments, coffee mugs, and more.

There’s also an outhouse bathroom nearby, with separate men’s and women’s entrances. It’s the old outhouse from the original location! 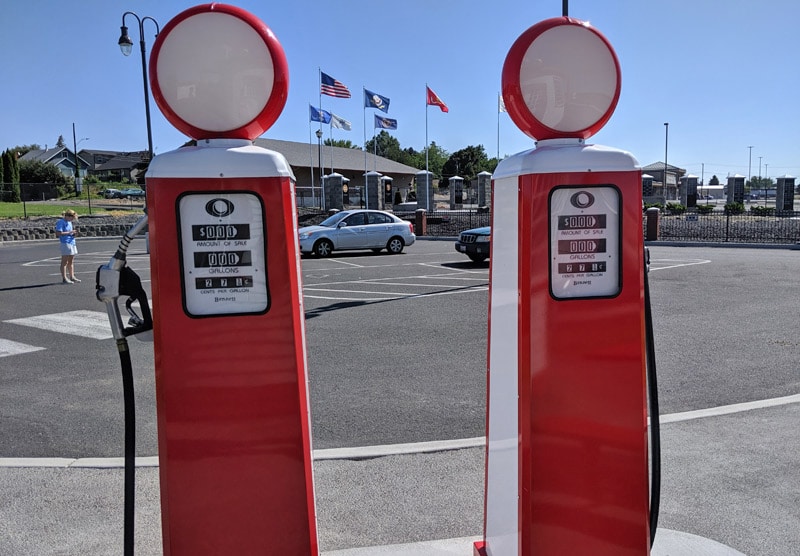 The gas station comes with an interesting backstory related to the Teapot Dome scandal of the 1920s. A member of President Warren Harding’s administration had leased oil reserves at Teapot Dome, Wyoming to private companies without competitive bidding.

Today, it seems like every government contract is given to well-connected friends of the politicians in charge. But back then, this was a massive scandal, especially since it also involved an executive order by Harding that the Supreme Court later declared illegal.

In fact, Teapot Dome was considered the biggest presidential scandal in U.S. history prior to Watergate. Secretary of the Interior Albert Bacon Fall was given a one-year prison sentence. Harding died two years into his term and was succeeded by Calvin Coolidge.

Jack Ainsworth created the memorial in 1922 in response to the scandal. He built his teapot gas station on Highway 410 between Zillah and Granger, next to his father’s general store. 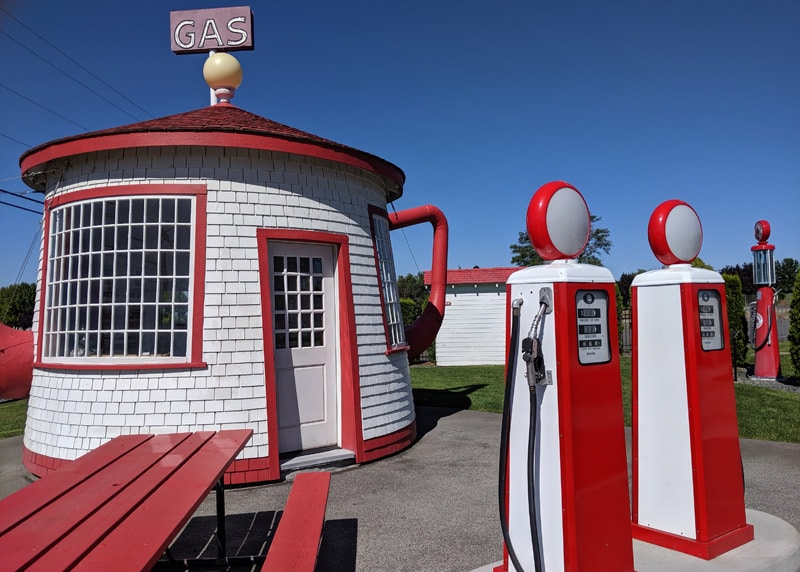 The Teapot Gas Station has actually been moved twice. In 1978, the teapot had to be removed due to the construction of I-78. However, just five days before its removal, a car crashed into the teapot and caused severe damage. After extensive repairs, the teapot was moved a mile away to 14691 Yakima Valley Highway. It continued serving gas until 2006.

The city then bought the teapot, fixed it up again, and moved it to newly-created Teapot Dome Memorial Park in 2012, along with its vintage gas pumps. 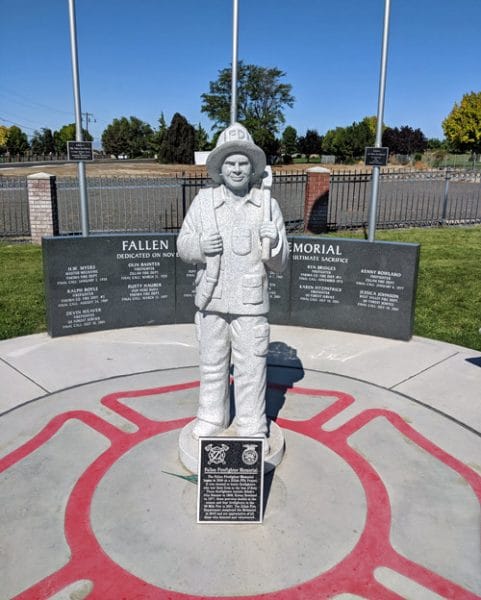 There’s a Fallen Firefighters Memorial next to the giant teapot. You may assume the memorial was created after September 11, since many communities across the country erected statues in honor of police and fire workers after that tragedy. But this memorial was actually started in 2000.

It honors firefighters who lost their lives in the line of duty. An engraved memorial displays the names of area firefighters dating back to 1938. There’s a statue of a single firefighter, surrounded by flags and benches.

The Teapot Dome Service Station is located at 117 1st Avenue in Zillah, in the south central portion of Washington. There’s a modest parking lot on-site, which is sufficient, since Zillah typically isn’t overrun with tourists.

Zillah is a 20-minute drive from Yakima, 2.5 hours from Seattle, and 3 hours from both Spokane and Portland, Oregon. It’s one hour south of I-90, so if you’re driving that popular highway that runs cross-country from Boston to Seattle, you could make a detour down to Zillah.

I suggest passing through Zillah as part of a road trip through Washington state. You can also check out the popular Christmas town of Leavenworth and natural attractions like Peshastin Pinnacles, Ginkgo Petrified Forest State Park, and Dry Falls, which was the largest waterfall in the world thousands of years ago but is now dry.

Looking for other quirky attractions in the area? Check out the last Blockbuster Video store in the world in Bend, Oregon, the infamous Seattle Gum Wall, and Portland’s Mill Ends Park, the smallest park in the world!