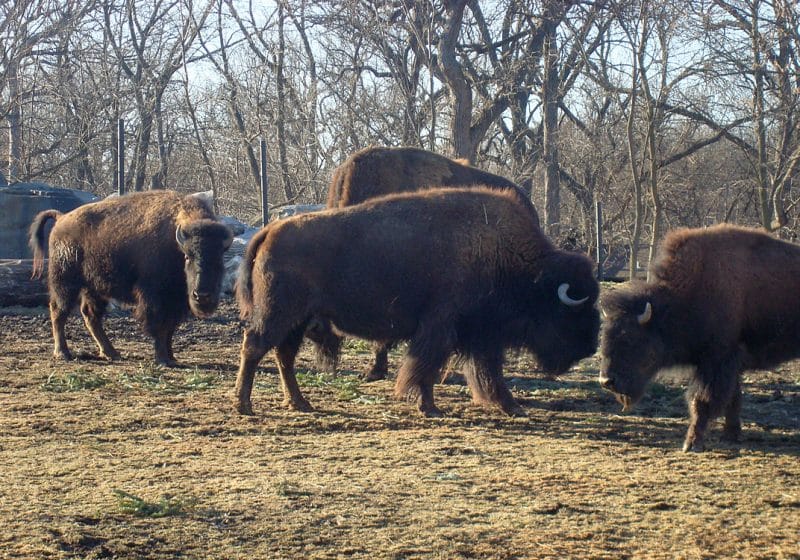 The Lincoln Park Zoo has no answer for the Brookfield Zoo’s herd of bison. Point, Brookfield.

There’s a fierce war going on between Chicago’s two major zoos. The Lincoln Park Zoo and the Brookfield Zoo despise each other and they’re battling for your business.* Which one should you visit in the Windy City? Let’s see how they stack up. Get ready for the Brookfield vs. Lincoln Park battle!

(*Disclaimer: Reference to a “war” may have been completely made up for the sake of creating fictional drama. I’m sure the zoos get along just fine.) 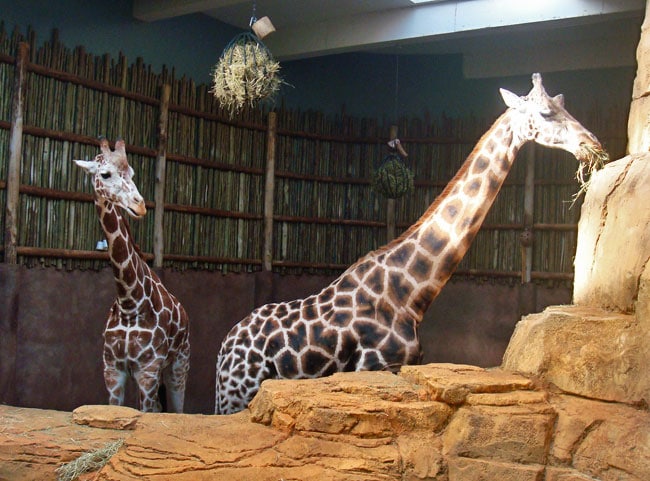 The giraffes in Lincoln Park can wander indoors or outside depending on their mood.

The Lincoln Park Zoo is the heart of Chicago, just off Lake Michigan in the happenin’ hood of Lincoln Park. Parking is a nightmare (crowded and expensive), so for the sake of your sanity, don’t drive there when you can take public transportation or Lyft/Uber. The closest train stops are the Armitage and Fullerton red and brown lines. The #22, 36, and 151 buses are also quite close.

I would never advocate bending the law, but you could probably stealthily park for free at the nearby Brookfield Woods lot if you wanted. Alternately, you can reach the zoo via public transit by taking the Metra Burlington Northern Line. Given the high parking cost, Metra may be your best bet. You’ll want to use the Zoo Stop at Hollywood Station and walk two blocks northeast. 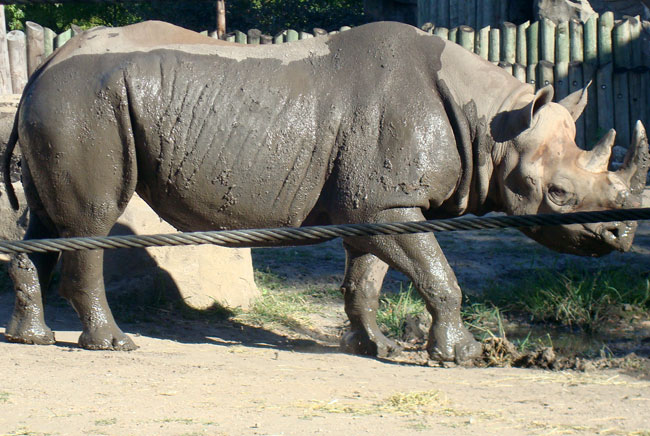 The muddy rhino is a great sight any time of year in Lincoln Park.

Variety of Animals at the Chicago Zoos

The Lincoln Park Zoo has pretty much all the animals you’d expect from a big zoo – lions, tigers, rhinos, bears, giraffes, penguins, gorillas. But usually just 1 or 2 of each. It’s like they’re re-creating Noah’s Ark or something.

The zoo’s “new arrivals” according to their website include a Madagascar hedgehog (exotic!), a river stingray, a female polar bear, new giraffes and zebras, African penguins, and African wild dogs. It sounds like they have just about everything I saw on my real-life African safari! 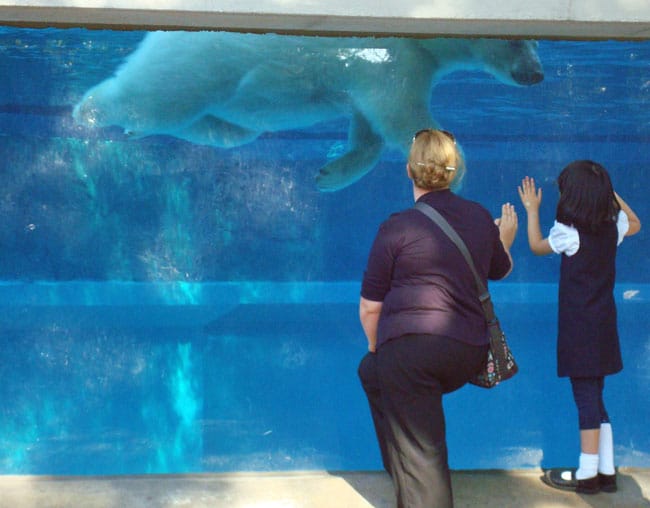 Getting an up-close look at the polar bear at the Lincoln Park Zoo.

The Brookfield Zoo is far bigger, with a massive primate room and a big outdoor field with bison. And a desert room with meerkats. Who doesn’t love meerkats? They have aardvarks, camels, alligators, bald eagles and lizards. Plus, they house a handful of endangered Mexican gray wolves, which you can see up close when they run past the observation window. The wolves put Brookfield over the top on this one. 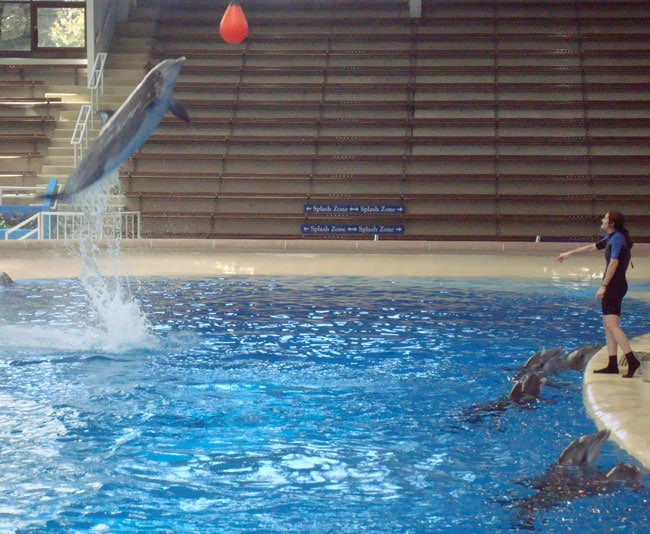 Brookfield is totally made for kids. Every sign is colorful and cartoonish. It’s a really fun atmosphere. There’s a petting zoo and merry-go-round for the youngsters. And they have special dolphin shows. You can watch the trained dolphins perform tricks and fly out of the air to the tune of Van Halen’s “Jump.”

If you don’t have kids, though, stick with Lincoln Park, which has a slightly more mature crowd. Roughly once a month, Lincoln Park even has an “Adults Night Out,” which offers evening visitation hours after the gates close and a cash bar.

Edge: Depends on your scene. The Brookfield Zoo is better for kids, and the Lincoln Park Zoo is best for adults. 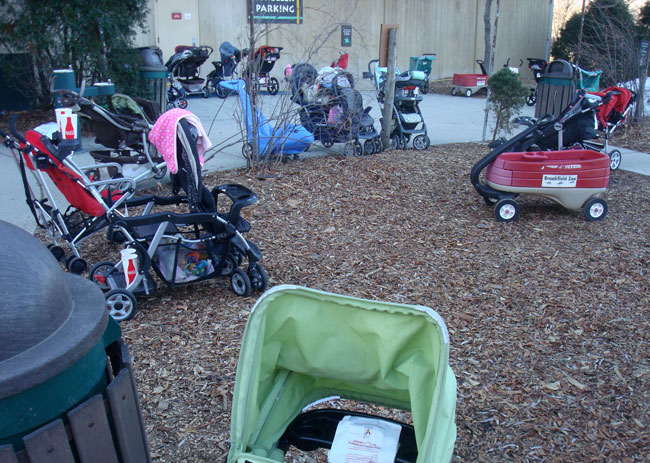 Brookfield has a busy “stroller parking” area for those who feel compelled to bring a newborn to a zoo.

The Lincoln Park Zoo is free, so you can’t beat that. The zoo has been around since 1868, and it gets its funding from the Chicago Parks Department, from concession sales, and visitor donations.

The Brookfield Zoo runs $25 for adults (that’s a $12 increase from just eight years ago!) and a whopping $18 per child. That’s almost $120 for a family of four, including parking. Ouch.

One thing to note: If you want to do any of the optional extras, such as giraffe feeding ($10) or penguin encounters ($40), you’ll need to pay even more. This zoo is definitely not budget-friendly.

On the plus side, you can sometimes find Groupons for the Brookfield Zoo, and on rare occasions in the winter, the zoo will have a free day. So if you really want to come here but money is an issue, keep your eyes open for those discounts. 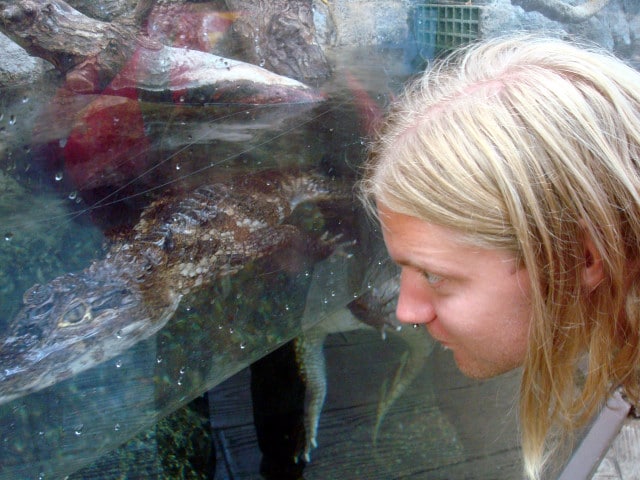 Seeing eye to eye with a small alligator at the Lincoln Park Zoo.

Both are excellent. For wealthy families with kids, check out Brookfield. For everybody else, the Lincoln Park Zoo is where you want to be. It’s cool to be smack in the middle of an urban paradise and see animals from all over the world. If you’re into animals at all, you should plan to swing by while you’re in Chicago.

Here’s a brief glimpse of the Brookfield Zoo in moving pictures.

When it comes to zoos in Chicago, these are your options. Despite the fact that both of these facilities are partly outdoors, they make our list of the best things to do in Chicago in the winter. They do have indoor buildings where you can go inside and get warm from time to time.

So which do you believe is the best zoo in Illinois?