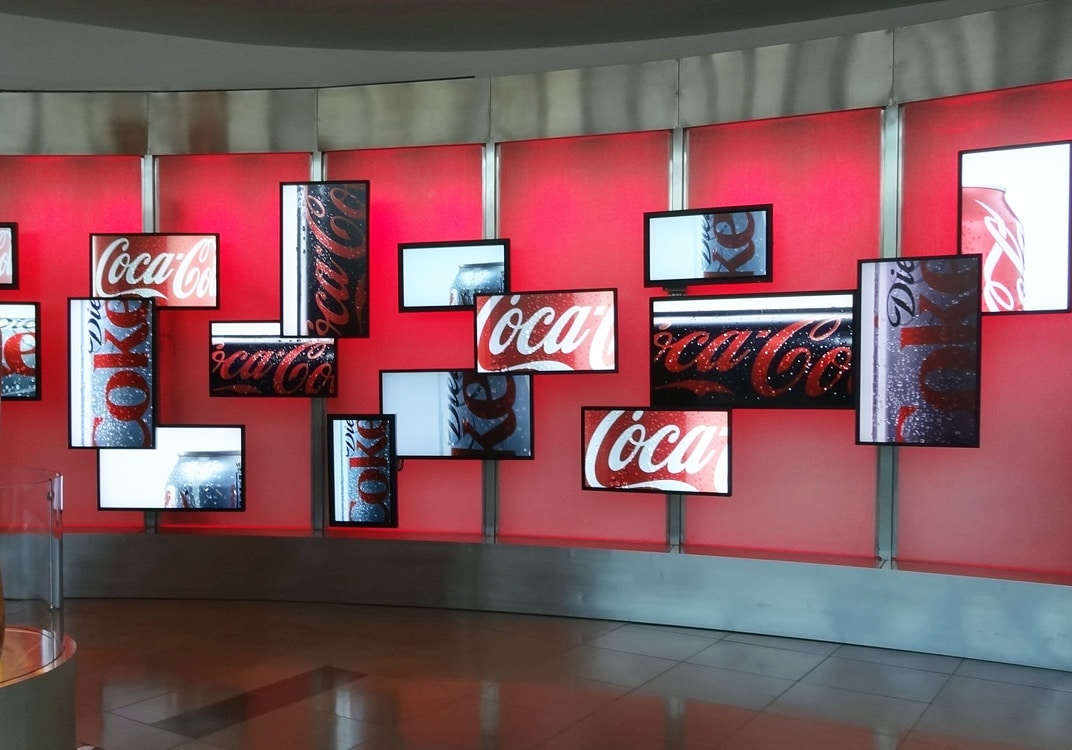 The highlight of visiting the World of Coca Cola (or Coke Museum) in Atlanta was getting the chance to try more than 60 different weird Coke flavors from around the globe. Presented with this exotic beverage buffet, I had no choice but to stand there and taste each and every one of them!

So which crazy flavor is best? Fanta Melon Frosty from Thailand? Perhaps Vegibeta from Japan? Or Krest Ginger Ale from Mozambique?

Before we get to the taste test results of all the World of Coke flavors around the world, let me tell you first about the fizz mirror, the outer space Coke dispenser, purses made of Coke cans, top secret ’80s documents from Coke executives regarding their “New Coke” plan, and other strange sights from the museum.

The guided VIP tours that used to be offered ($32 each) are no longer an option on the World of Coke website as of this writing.

There’s a parking garage on-site, but you’ll need to pay $10 per vehicle to use it. That fee covers four hours. You can sometimes find discount coupons that include admission to both the World of Coca Cola and the Georgia Aquarium.

Is it worth paying that much to see a bunch of Coke artifacts and novelties? Judge for yourself… here’s what you’ll see. 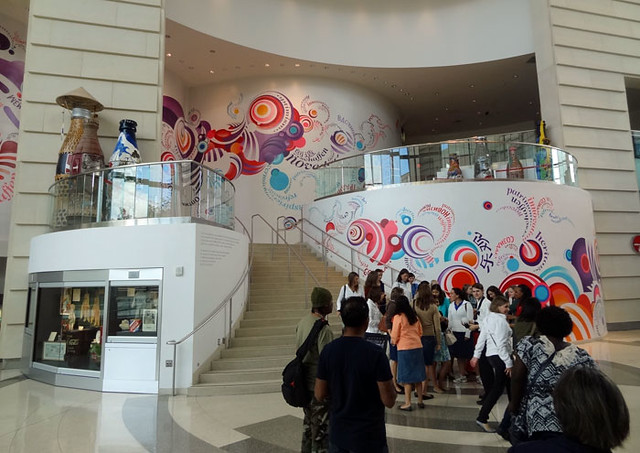 One of my favorite things about this place was all the giant Coke bottles decorated with designs from around the world. The bottle art began right in the lobby.

And there was plenty more inside. 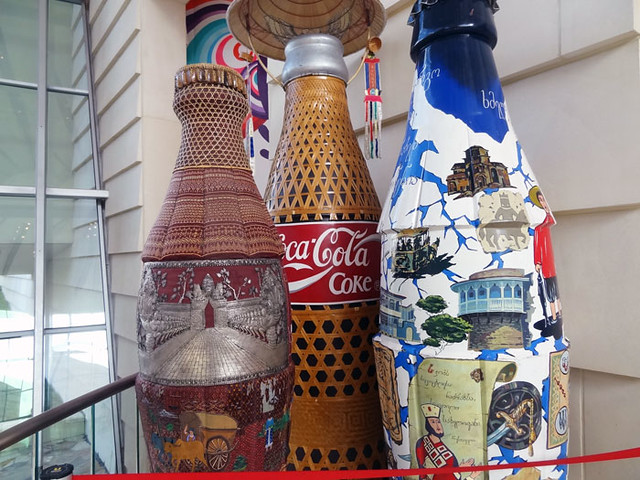 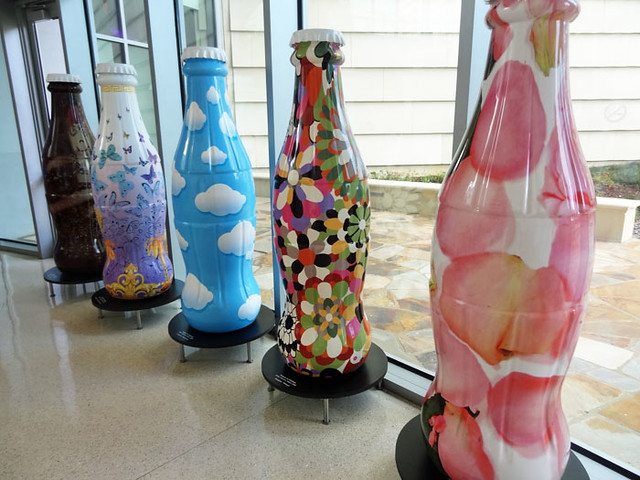 “The Vault” was a video presentation that promised to reveal the secret formula of Coke. Of course, you know they’re not really going to reveal the secret, so the whole thing felt like a big tease. Sure enough, the big reveal ended up being a disappointment. 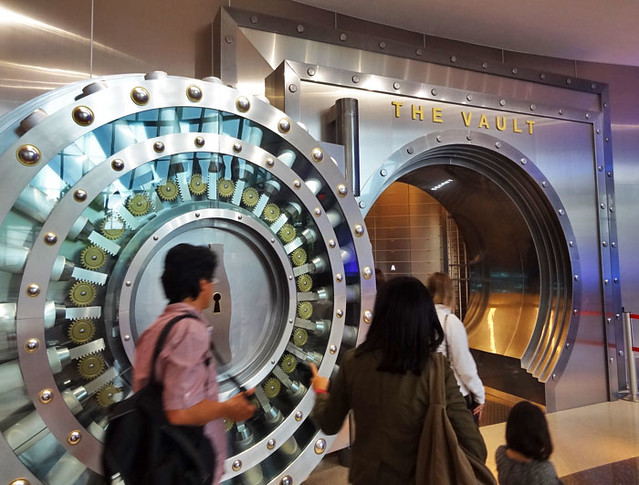 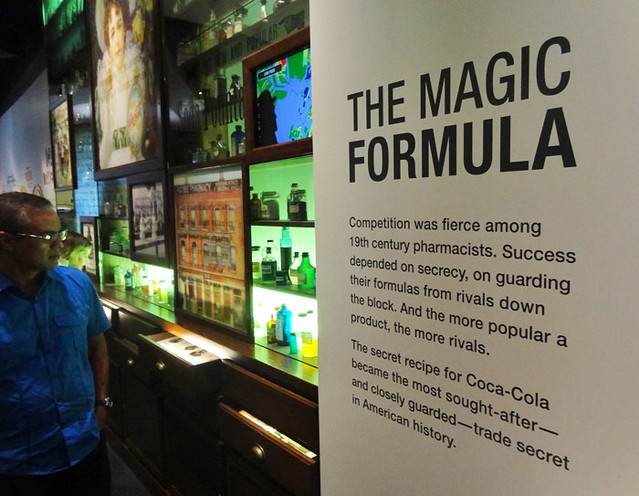 The only redeeming part of the Vault was the fascinating historic information. Such as a handwritten July 1887 sales report from creator John Pemberton, which indicated that 990 gallons of Coke syrup were sold in the previous five months. 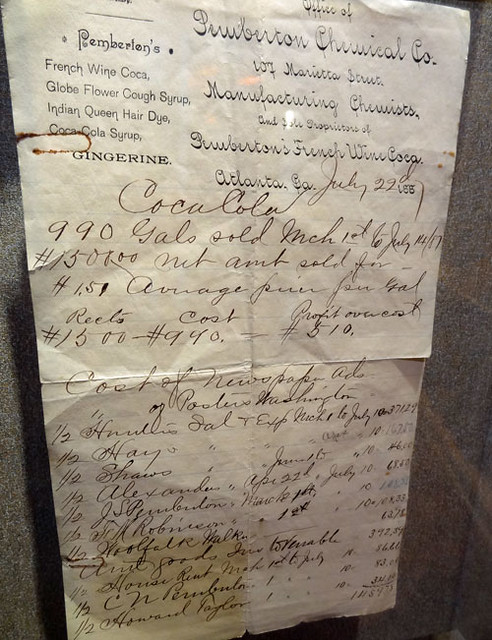 Here’s the fizzy camera. It’s some sort of video mirror that takes your image, shoots fizz bubbles all over it, and creates an artsy reflection. 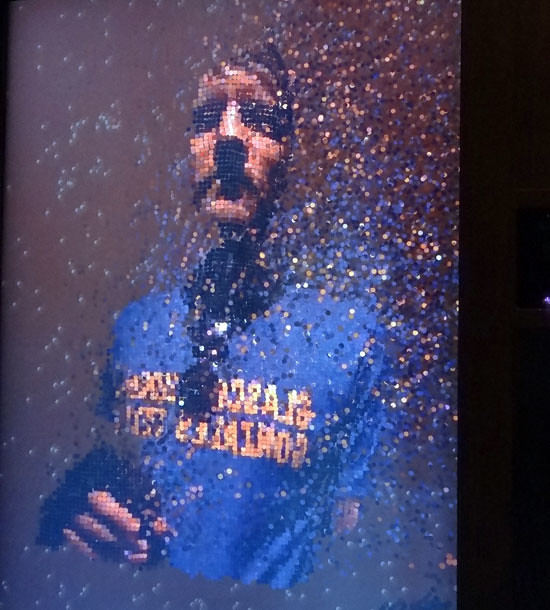 If you want to pose for a photo with the Coke polar bear, you can do that too. 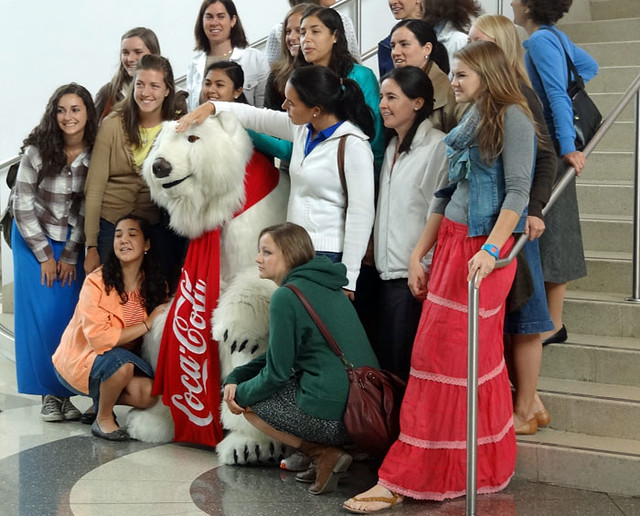 The room of soda artifacts was well worth stopping in. It contained numerous Coke products from over the years, including a Coke-sponsored table tennis game, plus books, calendars, and magazines.

And music, like this Supremes record. See, sponsorships and product placements are not new at all! 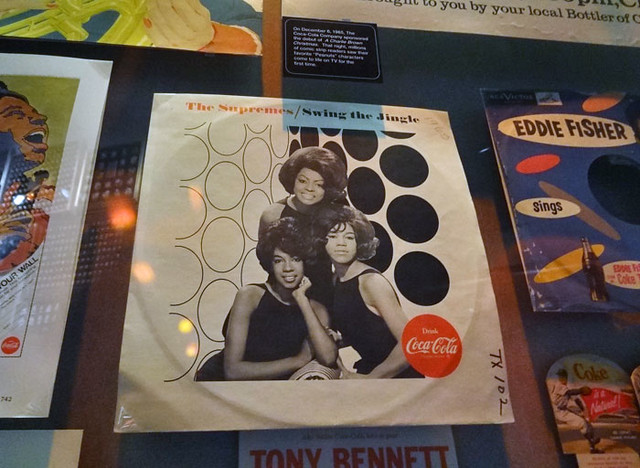 In the ’70s, these race car bellbottom pants could have been yours for only 70 proofs of purchase and a payment of $2.98. 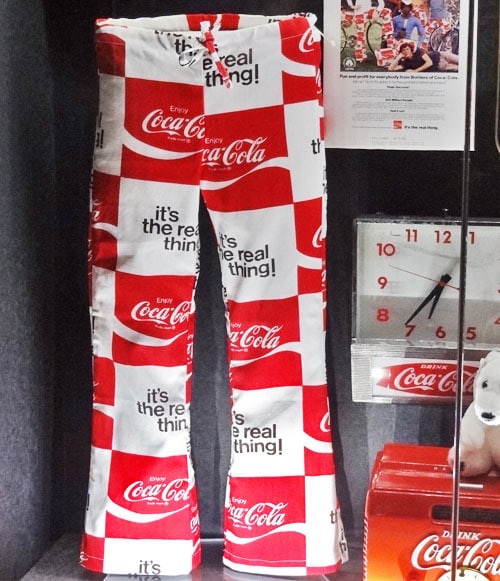 There were lots of vintage Coke machines. 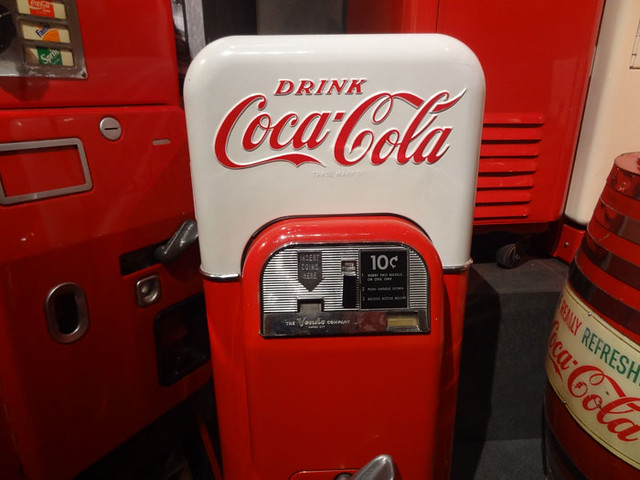 Based on the Olympic symbol, I’m guessing this machine came from Beijing in 2008. 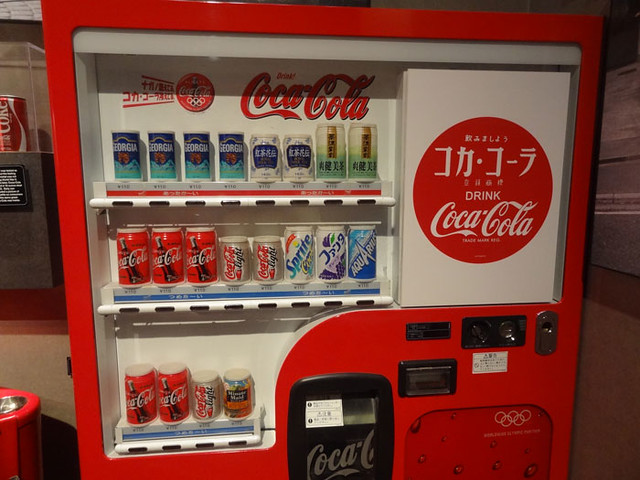 Video screens revealed facts about classic Coke. Did you know that Coke is 90% water? Or that the perfect temperature to drink Coke is a chilly 38 degrees? Adjust your fridges accordingly. 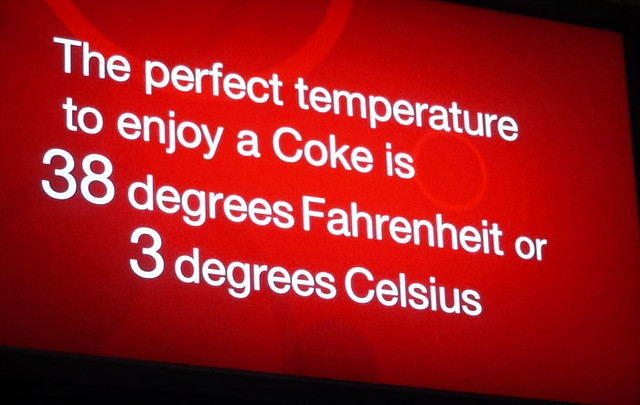 In 1995, the first Coke dispenser made its way to outer space on the Discovery shuttle. Take a look at this contraption. 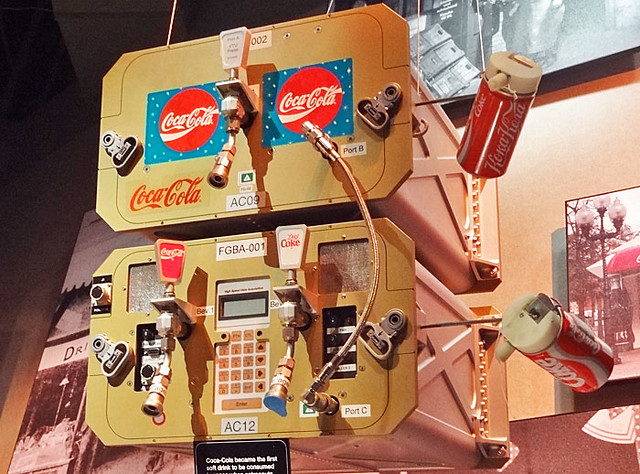 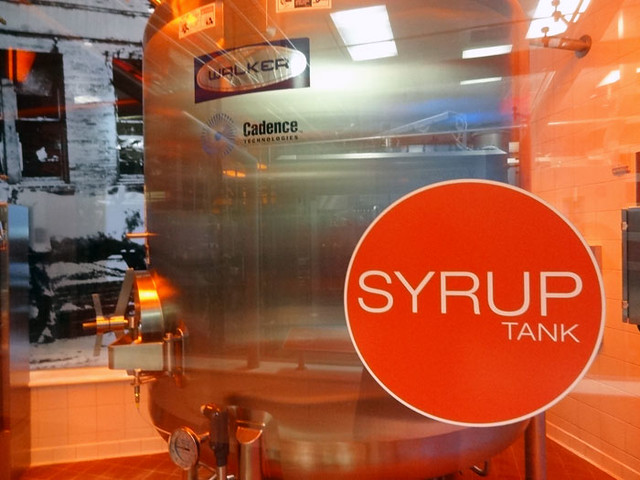 If you’re old enough, you remember the disaster that was New Coke in the mid-’80s, when the company changed its century-old formula, to much outrage and scorn.

The museum acknowledged this rough part of its history with a small exhibit including video from the press conference when the company brought back the original Coke. 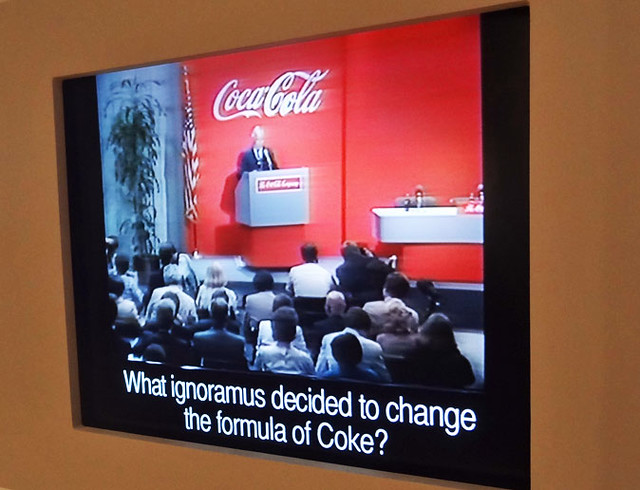 Here’s something that was outrageously uncomfortable. Coke referred to its top secret plan to change its formula as “Project Kansas.” Visitors to the museum can read some of the original documents from executives regarding this change.

The plan disturbingly said of the introduction of New Coke: “It is not unlike the Allied invasion of Europe in 1944.” The document continued referring to the rollout of the new drink as “a major military operation” and repeatedly compared it to World War II.

I’m almost speechless reading this. Someone had a seriously warped perspective of a simple soda beverage. 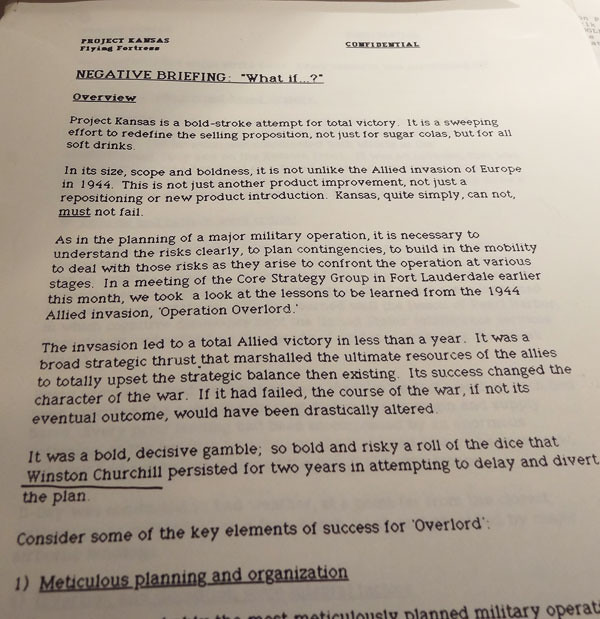 I’m not normally a fan of gift shops and their overpriced magnets and tshirts. But this gift shop has really unusual items. Ladies, forget Prada. Can I interest you instead in a purse made of Coke can tabs? 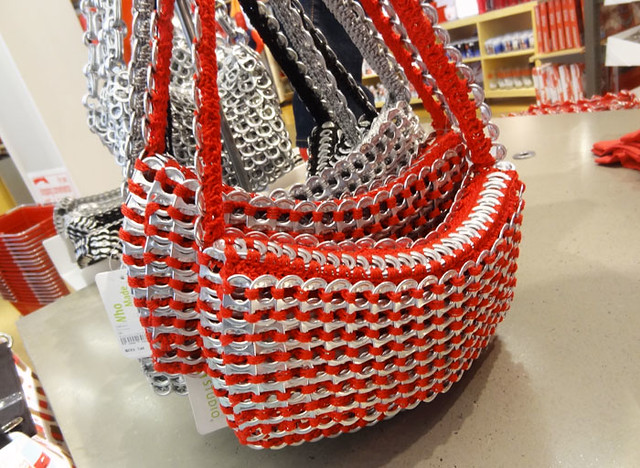 How about a table and chair set made from 111 plastic bottles? 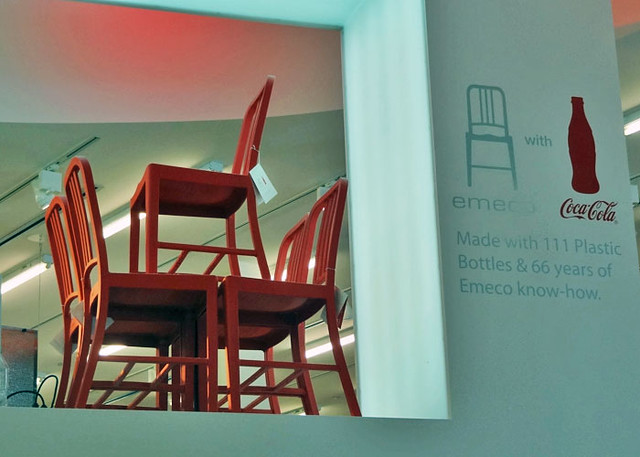 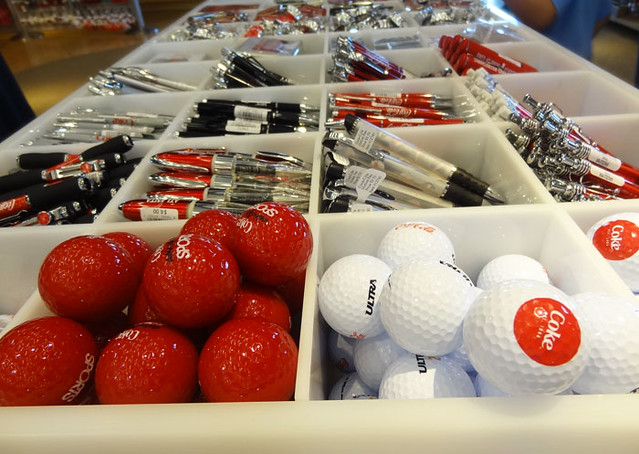 Weird Coke Flavors Around the World: Trying All 60 Varieties!

The last stop in the World of Coca Cola is Taste It!, the tasting room with self-serve soda machines featuring all the odd Coke flavors from around the world. I grabbed a cup and took small sippy portions of each and every drink.

The Smart Apple flavor from China was delicious. Interestingly, Chile’s apple version was very different, and it wasn’t sweet enough. Goes to show how people in different parts of the world have different taste.

Fanta Melon Frosty from Thailand was great, with a nice fruity melon flavor. I was excited by the idea of Fanta Exotic from Uganda, but it wasn’t very good. I didn’t enjoy very many of the African flavors, come to think of it. The Tanzania, Mozambique and Djibouti offerings left a lot to be desired.

As weird Coke flavors go, by far the worst was Beverly from Italy. I had even been warned about this flavor and urged not to try it, so of course I had to. I would describe it as a lovely mix of sparkling wine mixed with toilet water and dishwater. It was revolting!

Most of the World of Coke flavors were fruity and refreshing, though. The winner of my 60-flavor taste test was Bibo Candy Pine-Nut from South Africa, which had a sweet coconut taste with no fizz. When I make it to Cape Town, I know what I’ll be drinking!

And by the way, if you’re more of a Pepsi person, you can always check out the birthplace of Pepsi in North Carolina. But it’s not nearly as large or fancy as the World of Coca-Cola in Atlanta.

Have you tried any of the weird Coke flavors at the Coca-Cola Museum? Which were your favorite?