The inside of the earth has a front door.

Not every tour of Mammoth Cave National Park begins this way. The cave itself has around 25 known entrances, several of which are used for official park tours, and they’re not all this dramatic. But I’m lucky, because as a participant on the Domes and Dripstones Tour, I get to wait in a single-file queue for the opportunity to enter the planet’s upper crust through an open portal.

This particular entrance was intentionally created in 1921 when a sinkhole was blasted open with dynamite. Workers came in to set up staircases leading this “New Entrance,” as it’s called, down into the main cave.

The first 51 steps inside the door are man-made. Beyond that, it’s all natural cave, which formed over millions of years as water entered sinkholes, worked its way into the earth and carved out passageways and tunnels. 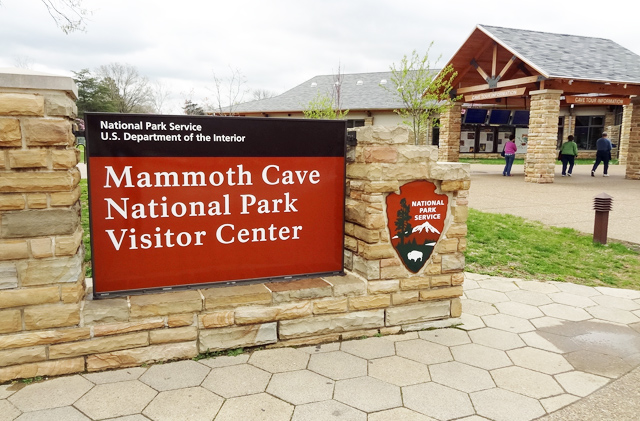 Mammoth Cave doesn’t seem to attract as much attention as some of the more well-known national parks, but it should. This limestone labyrinth is the longest cave system in the world, extending for more than 400 miles when all the passageways are added up (hence the “mammoth” descriptor.) Stepping inside it is quite an experience.

Located in western Kentucky, Mammoth Cave is an easy road trip from Chicago. You can swing down and spend the weekend exploring the park and taking multiple cave tours.

Fyi, if you’re seeking a Mammoth Cave map, click here to view a PDF of the latest available map of the park grounds.This is a highly-detailed map of the entire national park.

The map shows the Historic Entrance, plus various other cave entrances, campgrounds, cottages, and hiking trails. A mini version is shown below.

I’m ready to take the Historic Tour, but when I arrive and check my phone, I realize I’ve just entered a new time zone. Doh! Mammoth Cave is just on the other side of the Central Time Zone line, meaning that anyone coming from Louisville or Lexington who doesn’t plan ahead will suddenly find themselves with an extra hour to kill.

Waiting around is out of the question since I have a plane to catch, so I call an audible and book the Domes and Dripstones Tour. The staff buses our group of about 50 people over to the entrance for this tour, which is literally a door stuck into a hillside.

The underworld’s front door is secured with a padlock, so the rangers bring a key to open the latch. The experience is bizarre, like walking into some survivalist’s hidden bunker. You’d never find this place if they didn’t guide you here. 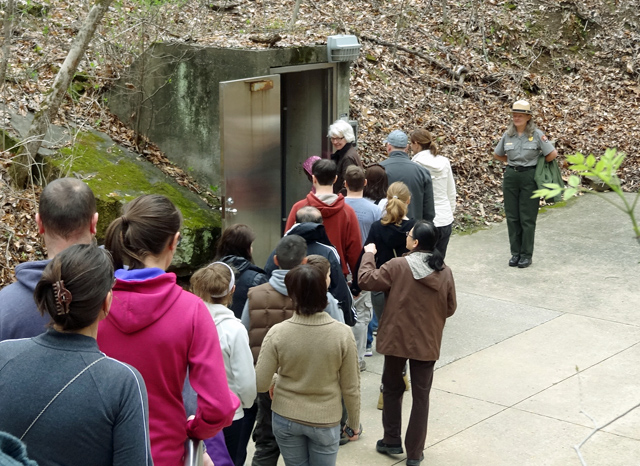 Walking down into the cave is tricky. It’s not for portly people, as the National Park Service bluntly warns before the tour commences. There’s a maze of twists and turns with sharp corners and wet, steep staircases dripping with the moisture seeping out of the cave’s walls. The NPS has installed lights along the way, but in some places it’s still fairly dark.

I try to snap photos along the way, but they come out blurry, because I’m not allowed to stop moving. The rangers are militant about not letting anyone pause to take pics, since the chain reaction slows down the line and spreads out the group too much.

I now present my unique series of “Mammoth Cave photos on the go”: 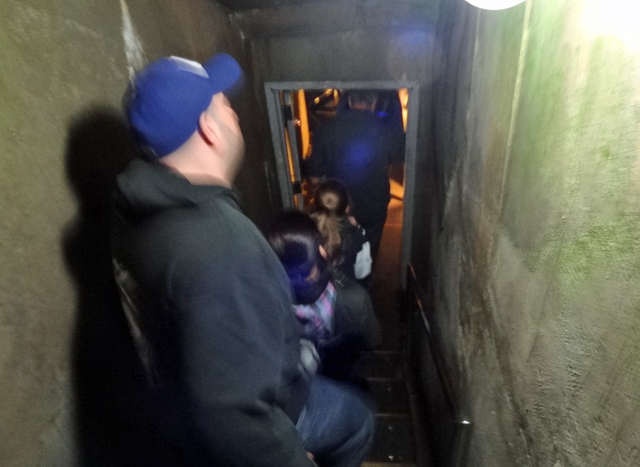 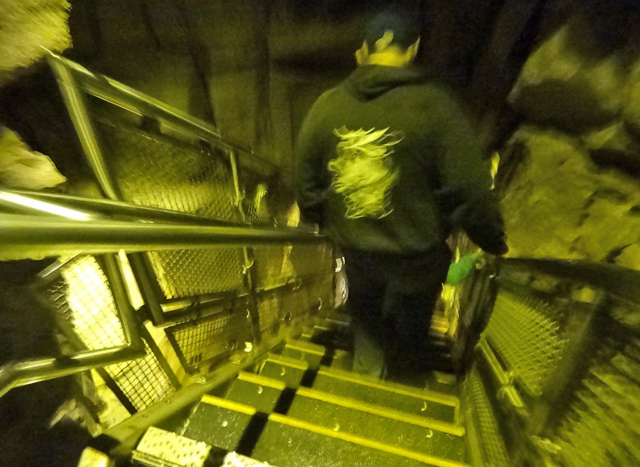 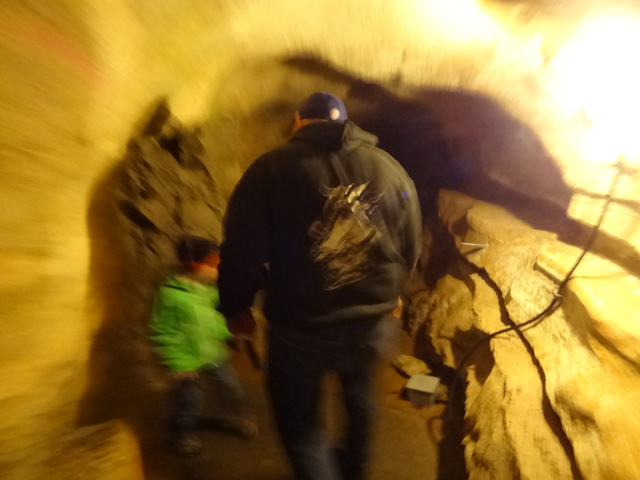 Trippy, right? I should claim that I intentionally made them blurry like this because I’m trying to be artsy. Yeah, that’s what happened.

The tour proceeds down into “Grand Central Station,” a huge open room in which the NPS has set up benches. The stop provides a chance to rest and take a few decent pics while the rangers continue their lecture and a few bats fly around overhead.

Additional photo opportunities present themselves while we wander through more rooms 250 feet underground. 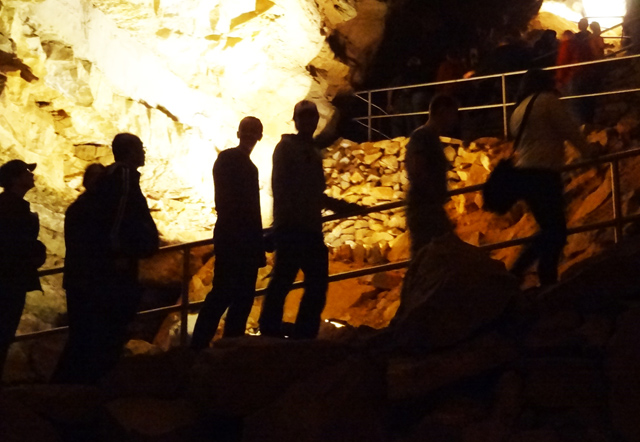 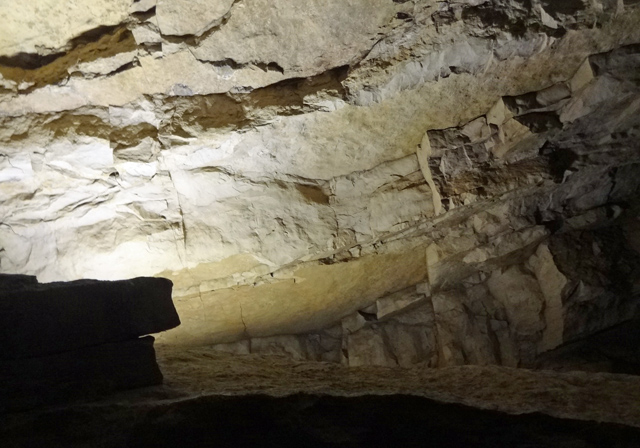 In some places, green algae is visible on the walls near some of the lights. The algae enter the cave on visitors’ clothing and thrive off the heat and energy from the lights.

The NPS has been working to eradicate the algae since they’re not a part of the natural cave environment. Fortunately, recently-installed low-voltage lights don’t give off nearly enough energy, and the algae are dying off.

Before exiting, we get a chance to see some of the more unusual geologic features near the Frozen Niagara Entrance, including formations on the ceiling and floor of the cave. 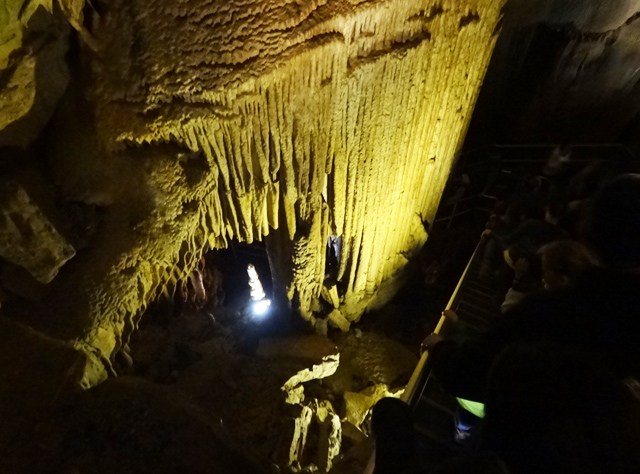 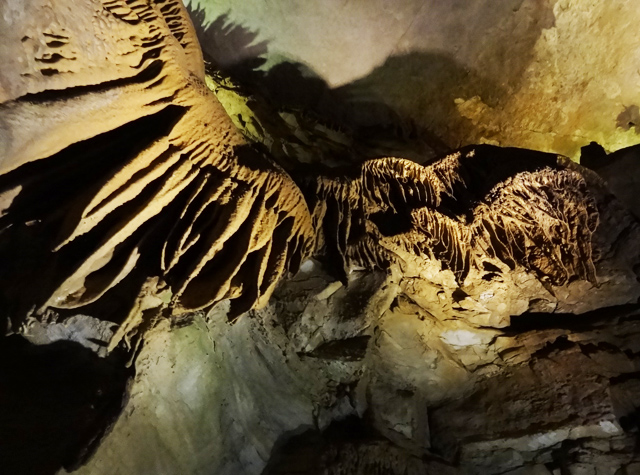 A ranger picks up a cave cricket and holds it on display for show and tell. These critters live in the cave but head up to the surface when it’s time to search for food.

After exiting the surreal underground universe, we’re shuttled back to the visitor center and sent on our way, but not before we must participate in a shoe bath. Tour guests have to step on bio-security mats to prevent the spread of White Noise Syndrome, a fungal disease affecting bats. Lather up those Reeboks! 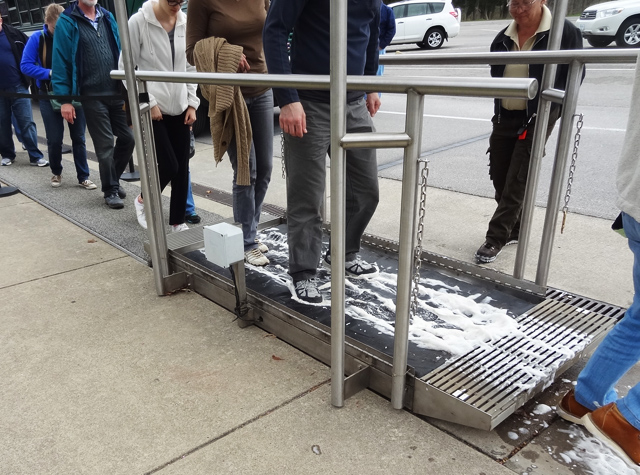 I was visiting Mammoth Cave by myself, and it was easy to join the tour and get a good experience. Mammoth Cave is one of the top USA national parks for solo travelers.

This past year, I returned to Mammoth Cave and took the Historic Tour, which uses the Historic Entrance. This tour involves a short walk (less than one-fifth of a mile) from the visitor center.

The ranger meets with the tour group at one of the park shelters to explain the tour. Then, the group proceeds down the sidewalk, which goes down a short hill to the entrance.

The historic entrance looks very cool, as throngs of tourists go in and come out of this hole in the ground:

Once inside the cave, much like the Domes and Dripstones Tour, the Historic Entrance Tour follows a series of dimly-lit walkways, past fun formations on the walls and ceilings.

There aren’t a ton of great photo opportunities because it’s dark. So just go and enjoy the 2-mile walk through the cave as a fun life experience. 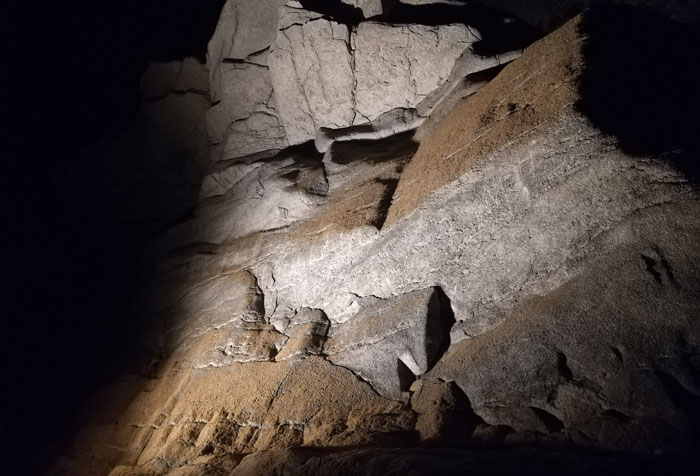 The NPS makes a big deal about the eyeless cavefish, which is exactly what is sounds like – a creature that has evolved to live in the watery depths of the cave and has no need for eyesight.

Sadly, though, visitors can’t see these fish anywhere, as none of the current tours go to those spots. Supposedly, scientists have located 42 different species in the cave that have adapted to the darkness. The visitor center has information about these creatures. 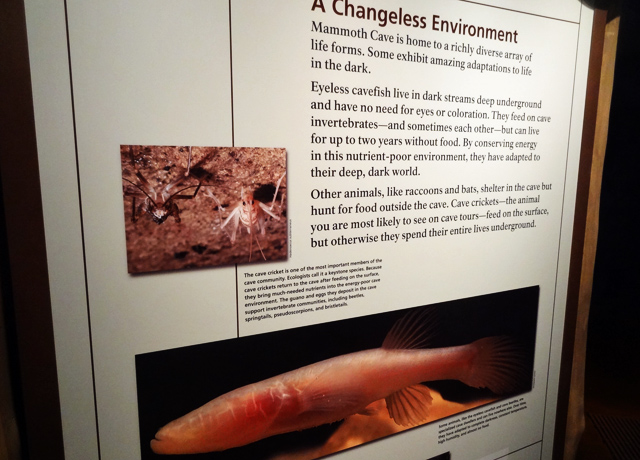 There are no woolly mammoths here, nor were there ever. The park gets its name not from the extinct beasts, but because it’s just freakin’ big.

You may catch a glimpse of deer or wild turkey, both of which appeared along the road during our bus ride to the cave entrance. But wildlife isn’t the main draw here.

There’s hiking, and a campground, and nature-y spots like Sloan’s Crossing Pond, a bed of water that rests atop the cave. “Wetlands on the Roof” is how the informational marker describes it. 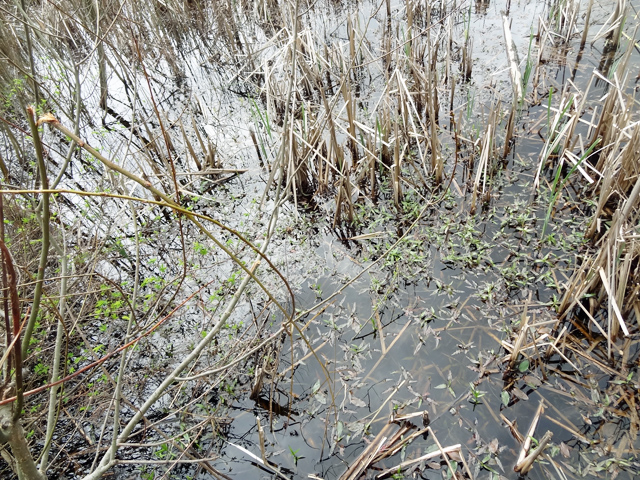 Mammoth Cave is sorta out of the way for many people, but I highly recommend a visit if you plan to be near Kentucky. I enjoyed the visit even more than Carlsbad Caverns.

I also recommend making the drive to Louisville to visit the Muhammad Ali Center, Churchill Downs, and the world’s largest baseball bat.