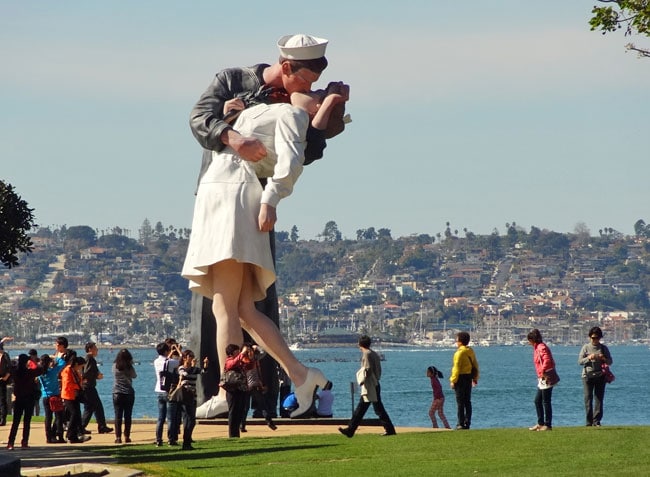 It’s been a rough stretch for iconic statues in major American cities recently. Chicago lost its Marilyn Monroe statue a while back, and San Diego struggled for quite awhile to keep the statue of a Navy sailor kissing a nurse.

The statue, designed after the famous photo taken in Times Square from World War II, was in San Diego along the harbor in the late 2000s before being removed for restoration purposes.

A few years later, it was thankfully returned to its proper resting place, and now the public can enjoy it again.

CHECK OUT THESE TOURS AND FUN ACTIVITIES IN SAN DIEGO

The “kissing sailor” statue is 25 feet tall, weighs 6,000 pounds and is called “Unconditional Surrender,” by J. Seward Johnson, although the city of San Diego has officially labeled it the “Embracing Peace” statue.

The statue itself is a remarkably accurate replica of the famous 1945 Life magazine photograph it is based on. The sailor puts his arm around the nurse’s waist, leans her back, and plants one on her lips.

The statue even captures the detail of his hat and the folds in her dress. Walking underneath the 25-foot work and looking up at it is a great way to fully appreciate its size.

It’s not far from the Maritime Museum and the other attractions along the harbor. It lives in Tuna Harbor Park, close to a Bob Hope tribute. 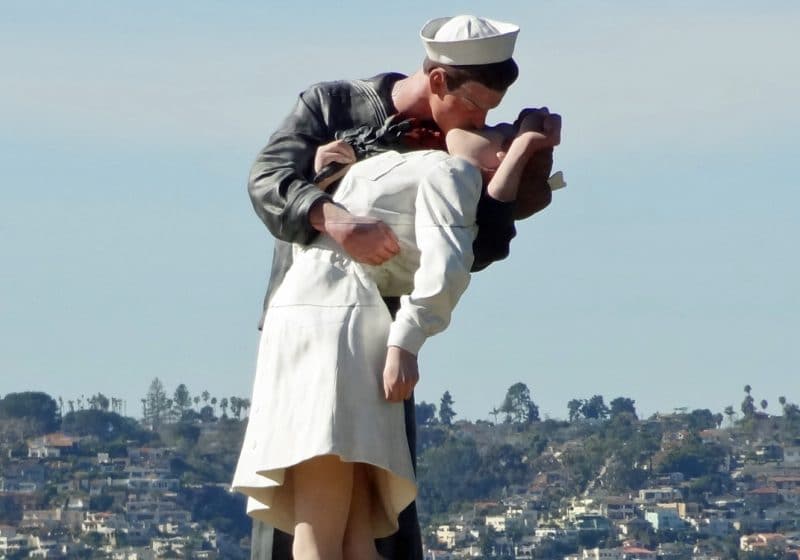 It was really nice to be able to see this statue in person. As cool as the photos are, it looks even more impressive up close when you realize just how huge it is.

While on a road trip through California, I saw this statue for the first time – initially while walking around Tuna Harbor Park, and then again later when I took a short boat cruise around the harbor. Multiple views of this iconic sculpture!

Here’s the lowdown on where to see this statue, and the extensive history behind it.

Return of the Kissing Sailor Statue in San Diego

The original statue was removed in 2012, but in 2013, a replica was installed back in San Diego, and it now rests there permanently. The USS Midway Museum raised $1 million to fund the replacement.

This replacement version of the statue is indeed bronze, even though the copy that had been there previously was foam-urethane. Johnson has created plastic, aluminum, and bronze versions of the Kissing Sailor statue over the years, charging different amounts for each type of sculpture.

The 2012 decision to restore the statue in San Diego was actually quite controversial. In fact, two members of the Public Art Committee resigned when the board voted to approve the statue.

Other versions of the statue reside in various cities around the country. Cities such as Sarasota, Florida, New York City, Key West, and Pearl Harbor have all had versions of the Unconditional Surrender statue on display at one time or another.

But the San Diego kissing sailor statue is the most iconic, since it’s been there for many years and because the city is known for its large naval base.

As of 2023, Tuna Harbor Park is officially open from 6 am to 10:30 pm if you want to stop by to grab a selfie with this famous couple. Expect plenty of other tourists to be around! It’s a very busy area, since the statue has become such a famous sight. 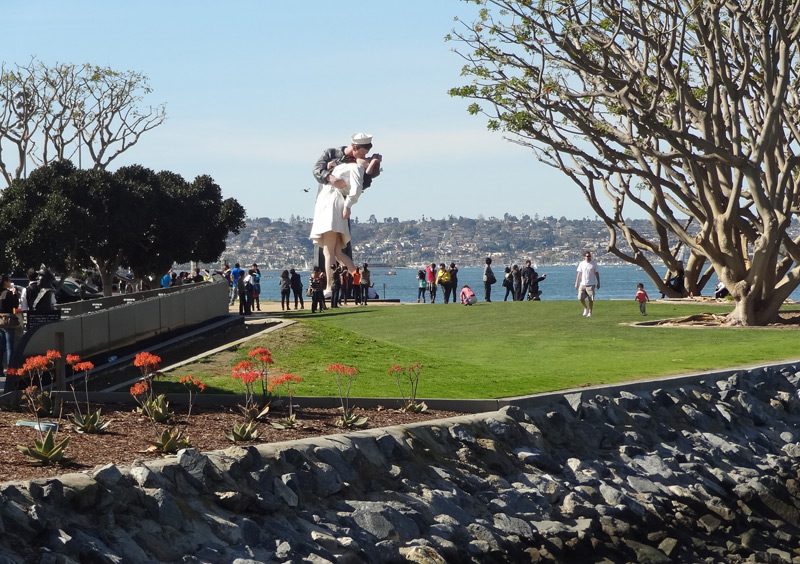 While the statue is commonly believed to be based on the Life magazine photo, there’s a similar photograph by Victor Jorgensen that could have been the actual inspiration. Either way, the pose is easily identifiable.

Tuna Harbor Park can be found at 3 Tuna Lane. It’s very walkable from downtown and the Gaslamp Quarter. It’s a small park, but it has shaded areas where you can relax.

From other popular neighborhoods like Hillcrest and North Park, you’ll have to drive or take transit to get there. Dogs are welcome in the park if they are on leashes.

Many couples take photos of themselves recreating the kiss in the grass in front of the statue. It’s a cool Instagram photo for sure if you choose to do that.

Why the name Tuna Harbor Park? The port was traditionally used as a port for tuna fishing. So the name was chosen to honor the city’s commercial fishing industry.

And don’t forget to stop by the San Diego Zoo or the Cabrillo Monument while you’re in town. Or even take a road trip to Joshua Tree National Park!

About the Sailor and Nurse

Interestingly, the woman depicted in the statue (and the famous photo) passed away in September 2016 at the age of 92.

Mischa Elliot Friedman had previously told reporters that she didn’t know the sailor and didn’t see him coming before he grabbed her and planted the famous kiss all those years ago.

The sailor, George Mendonsa, parted ways with Friedman immediately after the kiss. But that fleeting moment has now become such a famous landmark in San Diego and other places around America.

The photo itself was taken by Alfred Eisenstaedt and appeared on the cover of Life magazine, helping to cement its status as a lasting cultural moment.

In interviews later in life, Mendonsa said that he grabbed the nurse on a whim after having a few too many drinks.

After the kiss, they went their separate ways and did not stay in touch. In fact, Mendonsa did this in front of his girlfriend, whom he would later marry.

Some people may see the statue and think this was a couple in love, but nope, it was really just strangers who shared a moment on a whim.

The kissing sailor and nurse statue became a major image in American history even though the moment was fleeting.

UPDATE: In 2019, the sailor from the famous photo, George Mendonsa, passed away at the age of 95.

Mendonsa previously said in interviews that he grabbed Friedman because he was attracted to nurses, after seeing the way they cared for injured and wounded people following a Japanese attack in the Pacific.

“It was the uniform she had,” he said. “If that girl did not have a nurse’s uniform on, I honestly believe that I never would have grabbed her.”

As for the photographer, Alfred Eisenstaedt, he lived until 1995 and contributed some other noteworthy images, including a series of notable portraits of Sophia Loren.

As you might expect, the statue and the story behind have become moderately controversial in recent years. The 1940s were a very different time than the 2020s, after all.

Some folks are now uncomfortable due to the fact that the nurse was grabbed without her permission.

Some wonder whether we should be glamorizing such a moment now that we’re living in a more enlightened era. Someone put spray-paint on the sailor statue in Sarasota after Mendosa’s passing.

But others still romanticize the moment as a celebratory gesture from a happier and simpler time. The statue represents our victory in the war and a time of celebration for the nation.

Thus, the statue remains extremely popular even now, and you will definitely see lots of tourists around it when you visit.

In addition to this statue, J. Seward Johnson has created a number of popular statues around the country, such as Marilyn Monroe in Chicago and a series of lifelike human statues in Hamilton County, Indiana.

Note: If you’re really into World War II history, make sure to check out our article about the stellar and underrated World War II Museum in New Orleans!

There are lots of fun things to do in San Diego, and seeing this statue is definitely one of them! My top recommendation is taking the San Diego Harbor Cruise so you can see the rear view of the statue from the water.

That’s a cool view that many people don’t get to see, and it will give you some unique pictures and a cool perspective of the city.

Have you ever visited the kissing sailor & nurse statue?