When I saw the bizarre macaroni & cheese restaurant, I knew this was a cool neighborhood.

The Delmar Loop, or just “The Loop,” is the trendy, walkable neighborhood in St. Louis. Most cities have at least one such hipster area, with plenty of shopping, restaurants and nightlife, from Wicker Park in Chicago to Little Five Points in Atlanta to Williamsburg in Brooklyn. 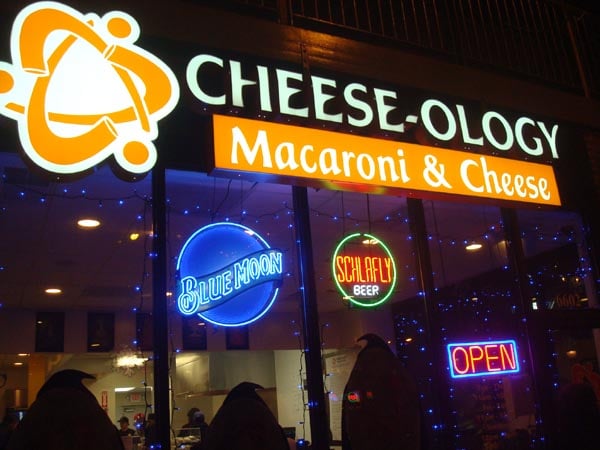 The American Planning Association named the Delmar Loop one of the ten “Great Streets in America” several years back. During my two days there, I discovered what makes the Loop such a cool neighborhood.

Two weeks before my visit to St. Louis, I read that St. Louis has the most crime per capita of any city in the U.S. That didn’t seem right, and when I asked my St. Louis host about it, he said it was because the city itself is a small area that doesn’t include many of the nicer neighborhoods and suburbs that are often included as part of other cities.

The Loop is a perfect example of that. Though considered one of the city’s most vibrant neighborhoods, it’s technically located in University City. The Loop provides easy access to downtown via train and bus, which isn’t true of all St. Louis neighborhoods.

My favorite site to check out the walkability of a neighborhood is walkscore.com, which assigns a score of 1 to 100 based on how walkable a region is. The heart of the Loop, Kingsland Ave. & Delmar Blvd., earned a score of 82, a very good number.

Perhaps the most well-known establishment in the Loop is Blueberry Hill. Known for its eye-catching décor, the restaurant opened in 1972. 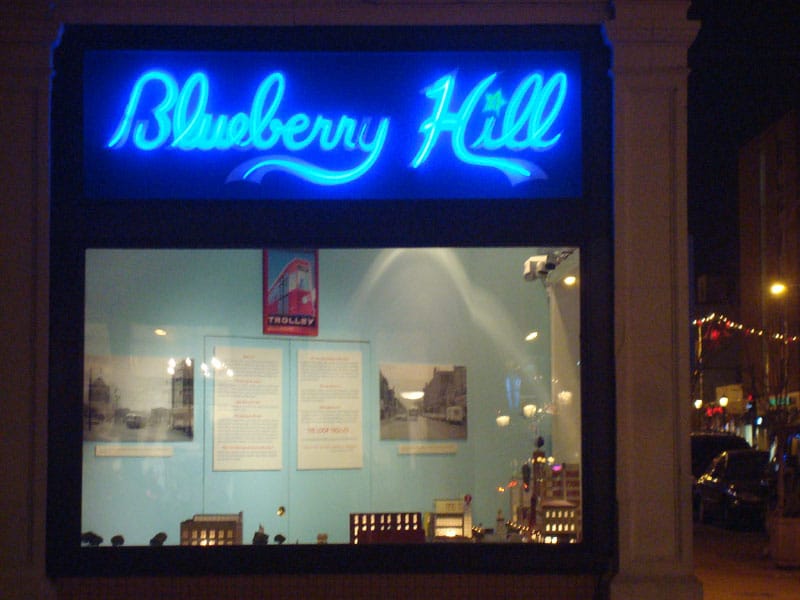 We strolled through each room to look at the memorabilia. The main dining room had display cases with random toys. One of my favorites was the WWF display, which featured a couple dozen ‘80s wrestling action figures. I had nearly every one of these as a kid… Kamala! Jake The Snake! The Honky Tonk Man!

Of course, there were plenty of music items, like Kiss figurines and Beatles dolls from both the Ed Sullivan days and the Sgt. Pepper era. The halls leading to the bathrooms had hundreds of photos of famous people visiting the restaurant. Pretty much every famous actor and politician from the last few decades was on display. 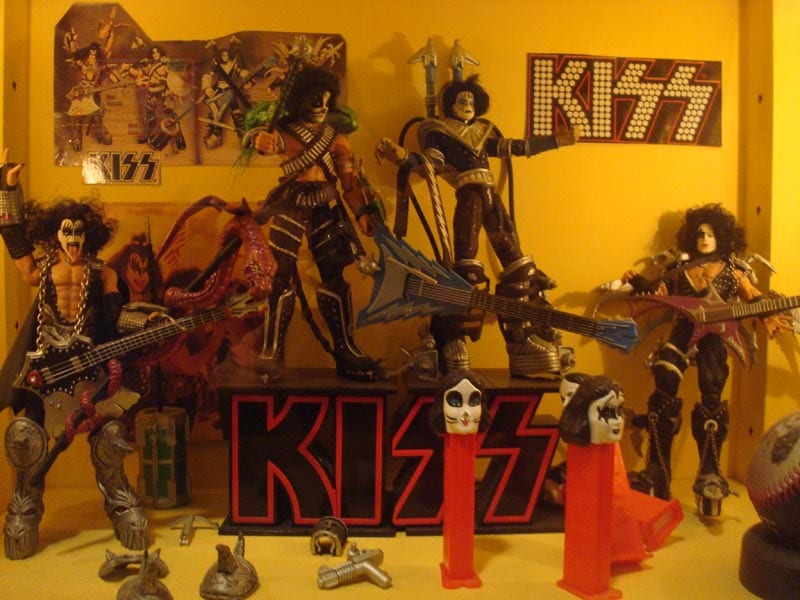 There was yet another room that featured several dart boards. I never got to try the food at Blueberry Hill, but I recommend stopping by any time you’re in St. Louis. The sights alone are worth it.

Everyone knows about the Hollywood Walk of Fame, but did you know St. Louis has one as well? It’s on Delmar Blvd., and it features stars of more than 125 celebrities born in the area. 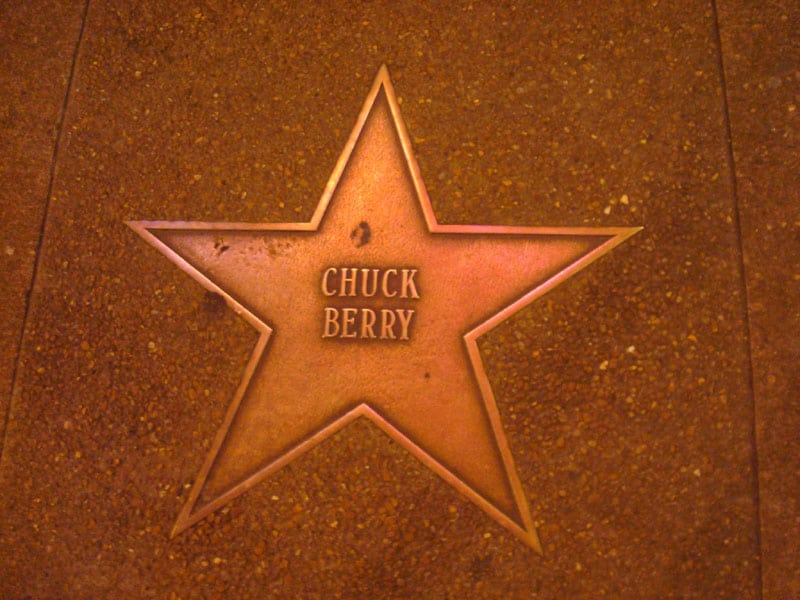 One of the main thoughts I had as I perused the names on the Walk of Fame was how odd it was that pretty much every baseball broadcaster in America was born in St. Louis. No fewer than four legendary announcers appear on the Walk: Harry Caray, Bob Costas, Joe Garagiola and Jack Buck.

I always wonder why more cities don’t do something like this. It’s a great way to build community pride and to encourage famous folks from the region to honor their roots.

Cheese-O-Logy is the restaurant that only serves mac & cheese. It’s not a place I would visit repeatedly if I lived in the Loop, but as a visitor, I had to see what this bizarre establishment was all about. I went with the Chicken Scampi variety of mac & cheese, and it was quite tasty.

Another neighborhood hot spot is Vintage Vinyl, a massive record and CD store. I was excited to find the recent record by Evelyn Evelyn, a freaky vaudeville-esque act created by singer Amanda Palmer. 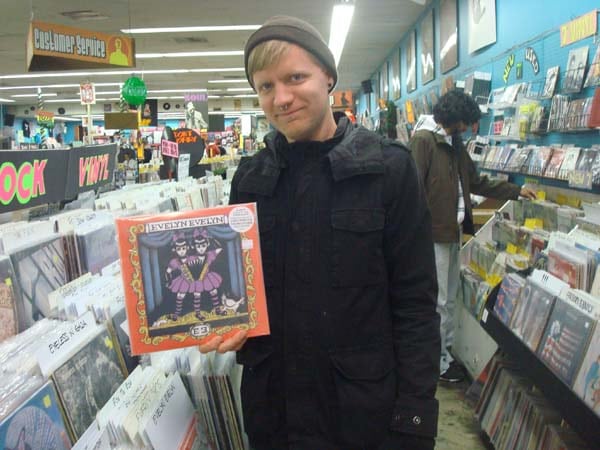 Other Loop spots of interest include Subterranean Books; the old-timey Tivoli Cinema; Pin-Up Bowl, a funky bar and bowling alley; the Planet Walk, a scale model of the solar system on the Delmar Street sidewalk that’s similar to the Planet Walk in Anchorage, Alaska; and the Pageant, a well-known music venue that recently hosted shows by Girl Talk and the Dresden Dolls.

The verdict? It’s a cool place. If I moved to St. Louis, I’d consider living there. The Delmar Loop is a fun and exciting area to live, work, and play. Check out the First Fridays event each month where businesses offer discounts and special events.