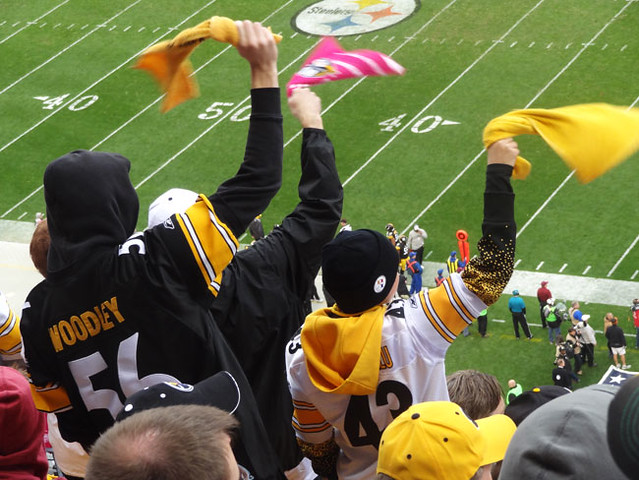 The pink towels flying through the air next to the usual gold ones were a strange sight, but the chants of “Here we go Steelers, here we go!” made everything feel normal. This was my first time attending a Pittsburgh Steeler game in ten years, and the day was a celebration of the team’s rabid fans as much as it was a chance to actually witness a football game.

As I’ve noted before, Pittsburgh is probably the most dedicated sports town in America. Everyone in the city bleeds black and gold. Literally. Maybe not literally. I haven’t cut anyone open to verify the accuracy of that statement.

Since I hadn’t been to a Steeler game in years, I took a rare splurge and coughed up $100 for a ticket (yep, that’s face value) to take in an October game against the Philadelphia Eagles. 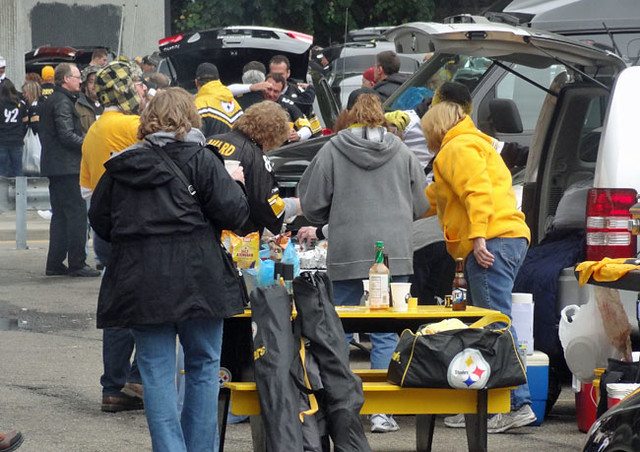 Keep reading for a game report, and scroll down for insider tips and suggestions for where to park near Heinz Field, which hotels to stay at, and things to do near Heinz Field before and after the game.

There were a decent number of Eagles fans in attendance. Given the intense atmosphere, I expected some ugly scenes between Steelers and Eagles fans, but it was mostly good natured teasing.

Except for one incident, where some Steeler fan threw a beer at an Eagles fan sitting several rows in front of him. For a minute, I expected a war to break out between the different factions, but instead, all the Steeler fans yelled for security and pointed out the loser who threw the drink, then cheered as he was ejected. I was impressed by everyone’s willingness to cross party lines to identify the culprit.

Let’s play Where’s Waldo. I spotted at least 7 green Eagles jerseys among the departing crowds. How many can you find? 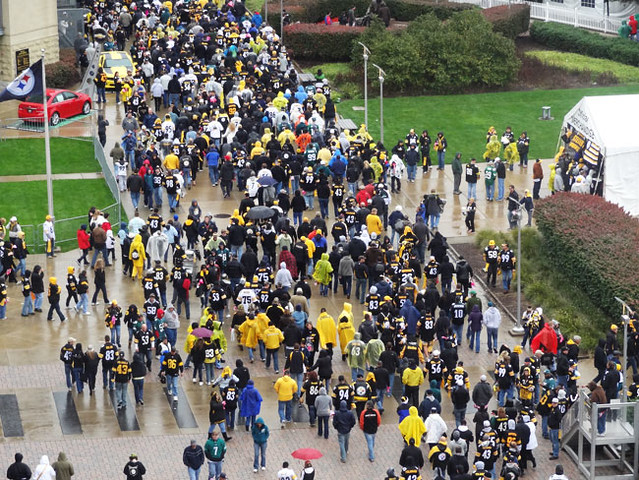 The Steeler fan base first embraced the Terrible Towel in the 1970s, and it has remained the signature characteristic of true fandom – if you’re not screaming and recklessly waving your towel around when the club makes a big defensive play, you’re not doing your job. 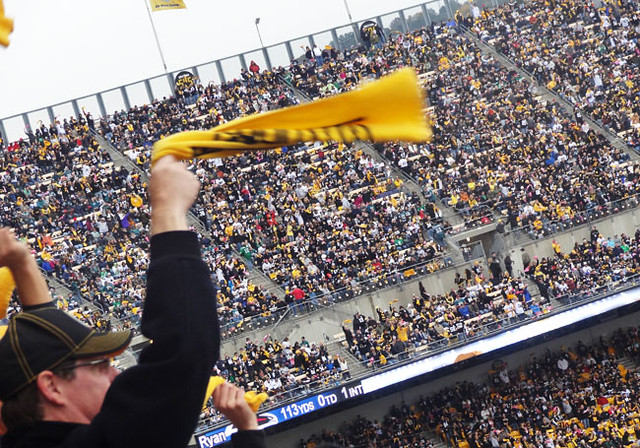 Those pink towels? They were a special promotional giveaway in honor of breast cancer awareness. 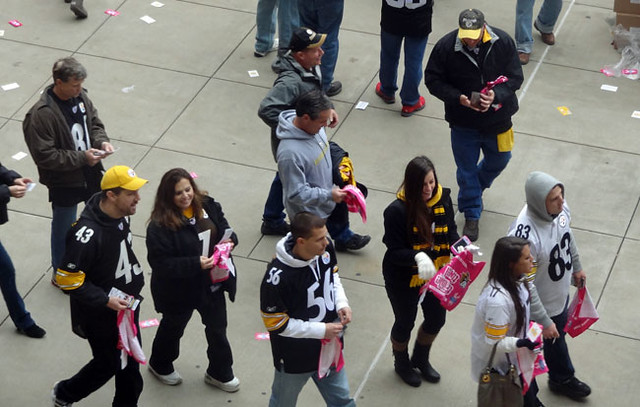 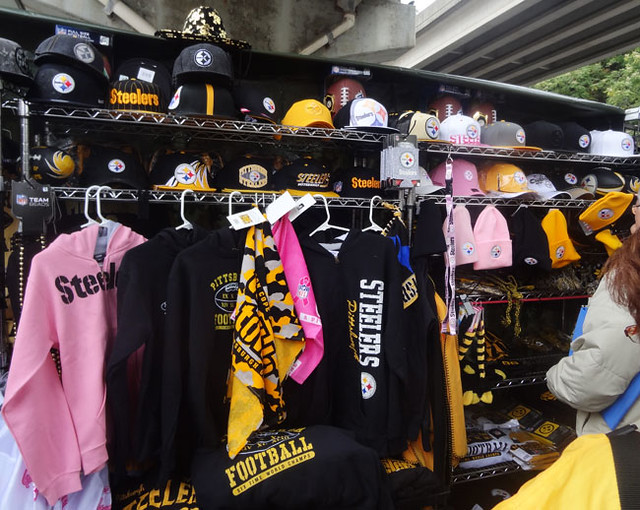 Normally you would never see NFL players wearing pink wristbands and shoes, nor see yinzer fans proudly waving pink garb, but concern about breast cancer has a way of making even the most macho dudes join the pink club.

The view of Pittsburgh’s winning skyline from the upper deck: 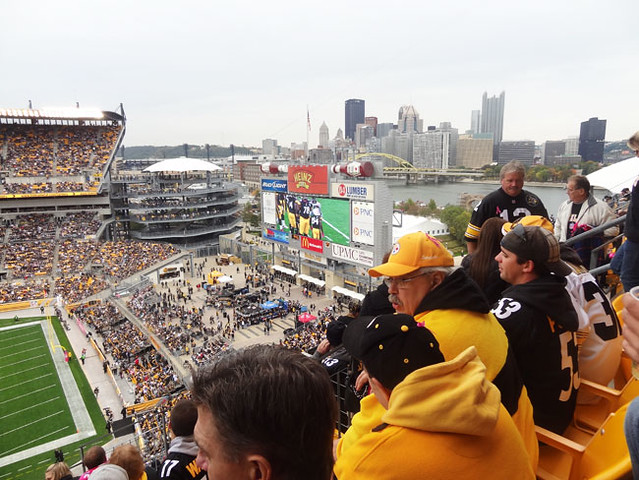 The game itself was not a work of art. The Steelers did that thing they do where they played down the level of opposition and needed a late fourth quarter defensive stand and a last-second field goal to win. Victory goes to the Stillers!

I was fascinated by watching the players on the sidelines during and after the game, since you don’t normally see that part on television. At game’s end, a prayer circle formed at midfield. 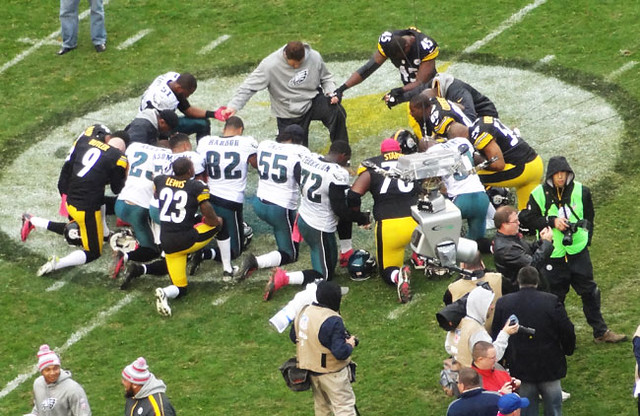 The weather was also crummy, cold and rainy, which necessitated some creative fashion decisions. Don’t hate on the elf hat. 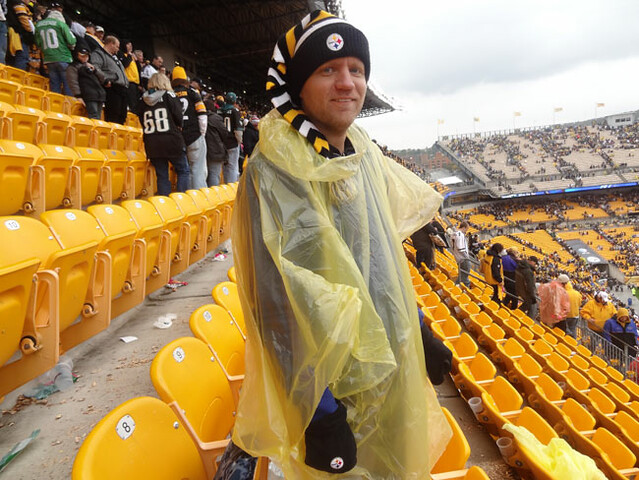 Heinz Field is actually a beautiful sight when it’s empty. 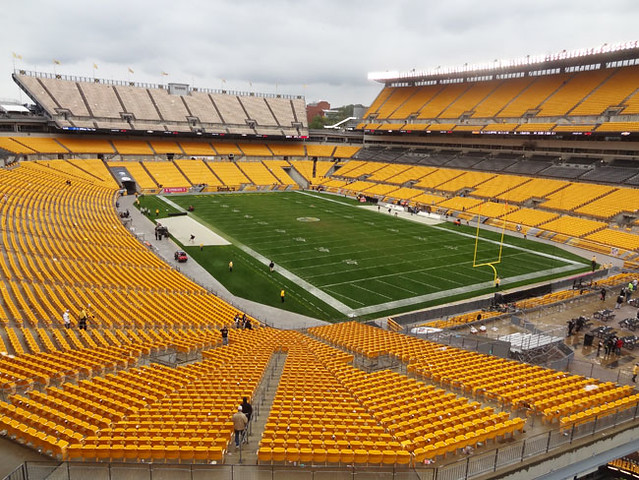 So is the skyline as seen through a transparent Steeler banner. 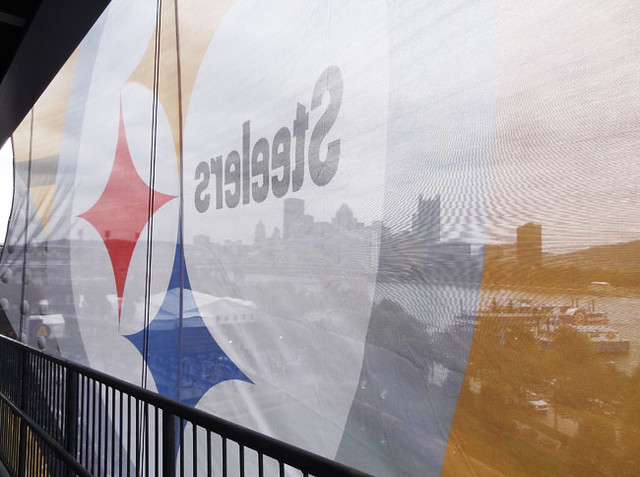 And leaving the stadium, the funniest thing was seeing all the evidence left behind by the tailgaters. I guess it wasn’t so funny for the people who had to clean it up, but they’ve had four decades to get used to that post-game reality, so don’t feel sorry for them. I just hope those bottles and cans got recycled. 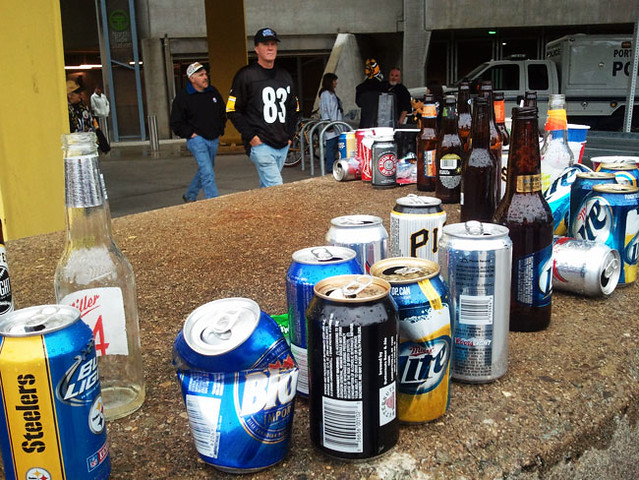 What’s the Best Place to Park at a Steelers Game?

With upwards of 60,000 people coming to see games in Pittsburgh, finding a spot for your vehicle can be a big challenge. Where’s the best place to park at a Steelers game? You have several parking options near Heinz Field.

The first option is the stadium lots themselves. Heinz Field parking rates can be upwards of $50 for a single parking space (yikes!) The downside is you’re paying a huge amount, but if you have a large group you can split the cost. And the benefit, of course, is that you’ll get to tailgate right next to the stadium with your 60,000 new best friends. 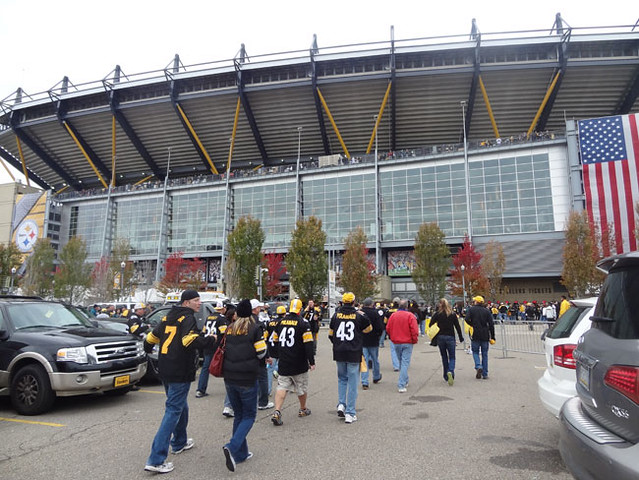 The North Shore area surrounding Heinz Field has several lots, but you’ll pay just as much as the stadium lots. Downtown has several garages which may be a bit cheaper. Then you’ll just have to walk across the bridge. Visit ParkPGH for real-time info on downtown parking availability for each lot. 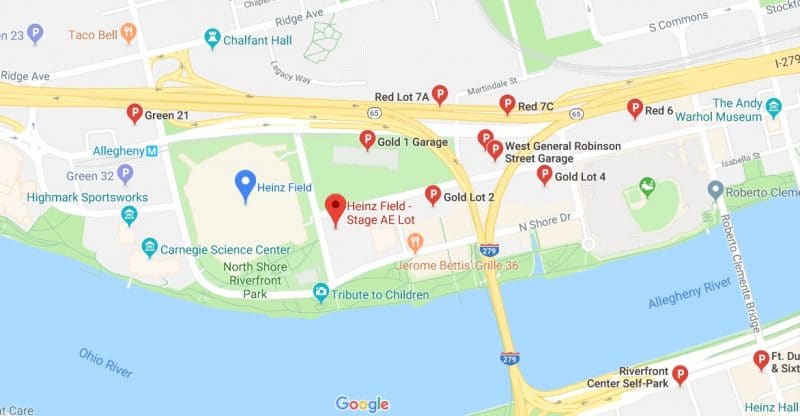 Looking for free parking near Heinz Field? Local insider tips: There are two spots I always like to park. One is over in the business district of the North Side. Look up the Giant Eagle supermarket, and head that way. Do NOT park in the market lot itself, but look on the side streets in that area. You may have to go up to East Ohio Street to find something.

READ NEXT
Glacier National Park Mountain Goats: Where to See Them in the Park

If you still have no luck there, head up to East North Avenue, near the National Aviary. As you go north of E. North Ave., you’ll find more street parking. But be warned… this is not one of the nicer parts of the city and crime does happen. It’s best to only park here during day games. Do not leave ANY valuables in your car if you park in this area.

4. Park at Station Square and Take the Gateway Clipper Shuttle Across

The Gateway Clipper shuttle takes patrons across the river from Station Square to Heinz Field. This is really not a great option though, because you still have to fight traffic to drive all the way into the city, pay to park at Station Square, and then pay $12 roundtrip per person to take the crowded shuttle. For a larger group, it’s cheaper to just park in a lot near the stadium.

5. Park in the Suburbs and Take the Train or Bus

If you really hate driving downtown, take a bus or better yet, the light rail, also known as the T. The Port Authority website used to have a page dedicated to taking the T to Steelers games, but they inexplicably deleted the page. For now, you can check their general schedule info page.

The T stops right at the stadium, so it’s super easy to park in one of the southern suburbs, such as Dormont or Castle Shannon, and take the light rail train to and from the game. This is your most cost-effective method, as it’s only a few bucks each way.

6. Leave the Car at Your Hotel!

The easiest solution for the parking at Steelers Games problem is to get a hotel downtown or on the North Shore. Then you can leave your vehicle there and walk right to the game! What are the best hotels near Heinz Field? See the next section below for some great options.

Note that this Steeler parking advice also applies to Pittsburgh Pirates games, since PNC Park is right next to Heinz Field. Parking lots are cheaper for Pirates games but you’ll still be paying quite a bit and dealing with a lot of traffic.

Upscale hotels: The Hyatt Place and Residence Inn by Marriott are the two closest hotels to the stadium. Both are pricey, but if you want the convenience of being right to Heinz Field, this is where you want to be. Book early because they will fill up on game weekends!

Inns and boutique properties: Also close to the stadium is the Parador Inn, a Victorian mansion with nine rooms. Other highly-ranked boutique options in the area include the Priory Hotel and the Allegheny Inn.

Budget lodging: If you want something cheap on a Steeler game weekend, your options are limited. The best bet on the North Side might be the Fineview Inn. Beyond that, you can move further away from the stadium area to a place like Quality Inn in the university neighborhood of Oakland. Or try Airbnb to stay with a local host. Pittsburgh does not currently have any hostels.

Click to search booking.com to see availability and price compare for all hotels and inns in Pittsburgh.

Things To Do Near Heinz Field and PNC Park

Bars and restaurants: The North Shore has a lot of popular bars and restaurants where Steelers fans hang out before, during, and after the game. The Jerome Bettis Grill along the river is a good bet, though it may be hard to get in on game days. Mullen’s and Bar Louie are also popular. Just walk around and you’ll find plenty of sports bars in the area. 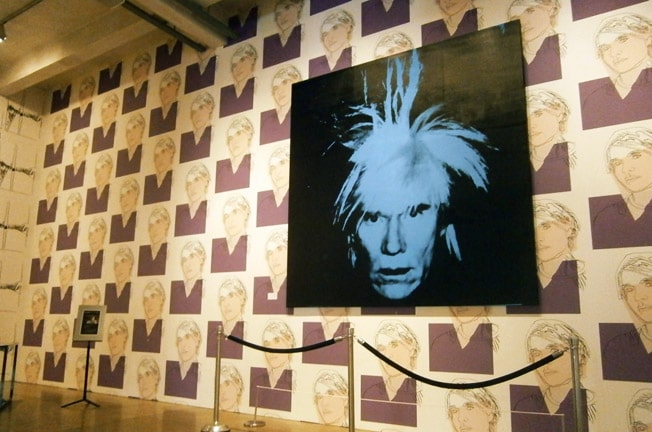 Andy Warhol Museum: Want some culture with your sports? Stop in to the largest museum dedicated to a single artist in the world to see the quirky art created by Andy, a Pittsburgh icon.

National Aviary: Birds, birds, birds. See them all here. Flamingos, penguins, parrots, bald eagles, toucans, owls, and more. The aviary is open 10 to 5 daily, so you can sneak in there on Sunday before the football madness starts.

Rivers Casino: Got a few extra bucks to gamble? Head to Rivers and try to hit it big on the slots or at the card table. They usually have promotions for new members, so be sure to ask.

Ride the Inclines: If you’re willing to walk or Uber over to Station Square, you can ride the famous incline cars up to the top of Mount Washington, where you’ll get the very best views of the city.