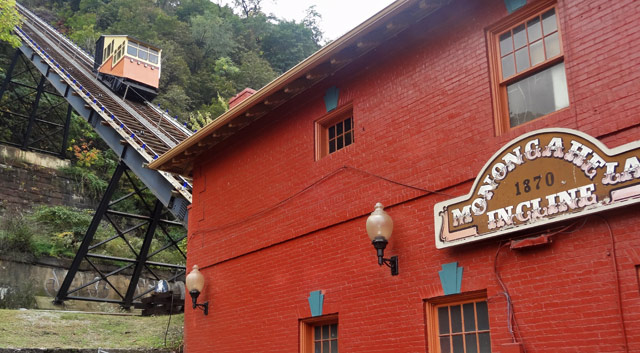 I love old-fashioned methods of transportation, from the streetcars in New Orleans to the cable cars in San Francisco.

Maybe the coolest quaint method of travel is the incline, the little cube car (also known as a funicular railway) that goes straight up a track on a steep hillside. Anytime you see a really cool picture of downtown Pittsburgh, chances are it was taken from Mt. Washington at the top of one of the two Pittsburgh inclines.

The Steel City is lucky to have two inclines: The Duquesne Incline, which has red cars; and the Monongahela Incline, known as the Mon Incline for short, which has yellow cars. 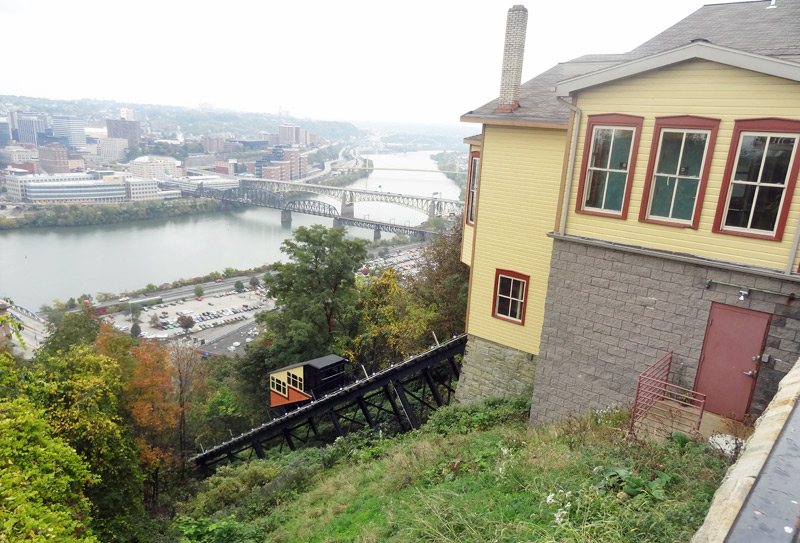 If you’re visiting Pittsburgh, which of the two inclines should you ride? What is there to do in the immediate vicinity? How much do tickets cost? What are the hours? I’m here to answer all of your questions about these cool tourist attractions in my hometown.

How Do the Pittsburgh Inclines Run?

The cars are not self-powered. Nor do they have operators on board. They are literally yanked up the hillside by the cable attached to them. There are two cars permanently attached to opposite ends up the cable, so that they always balance each other. One is always going up while the other is always going down. 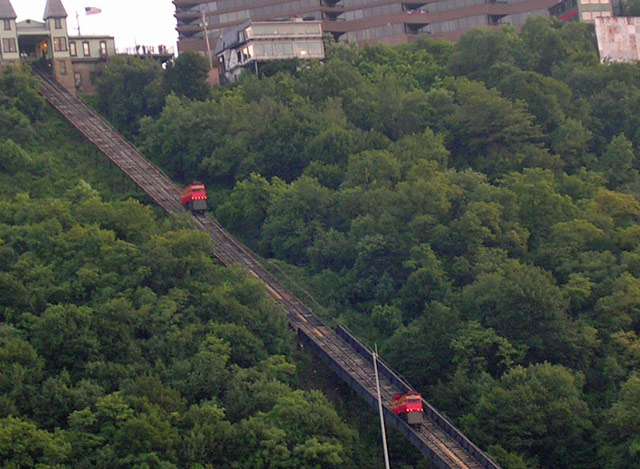 The operator sits in a small building at the top of the mountain and runs the engine that powers the cable. The cable only needs enough power to overcome friction and the weight difference between the passengers in the cars.

The Pittsburgh inclines now take riders up approximately 400 feet at a speed of 6 miles per hour. It’s slow enough that you’ll have time to enjoy the views. The inclines run every 15 minutes, so you will never have to wait very long to catch the next one.

Fewer than 25 people can fit in each car, so it’s an intimate trip. The inclines are open from before sunrise to well after sunset. So you can come during the day or visit at night, which many people prefer since the city is all lit up after dark.

Which Incline in Pittsburgh is Better? 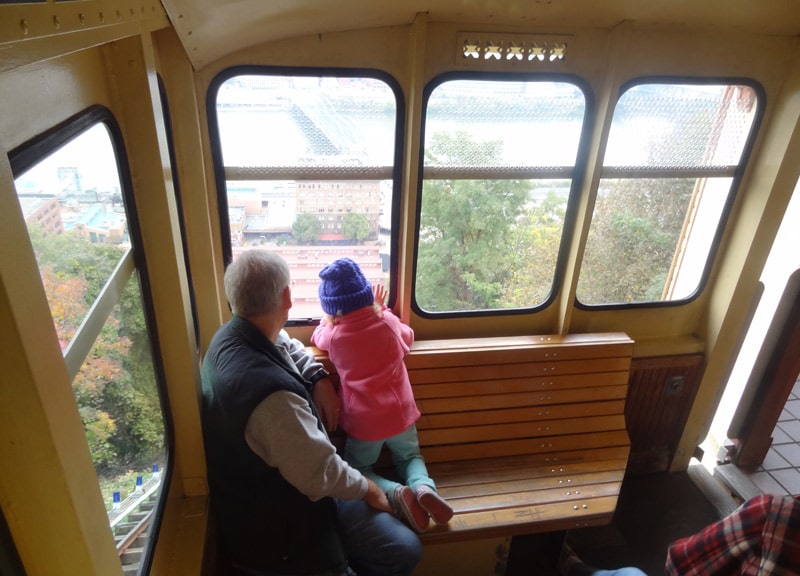 Which incline should you ride? Instagrammers, take note: For cool views and photos of the city, the Duquesne Incline is better, because it’s a bit further from downtown and provides a better angle back toward the skyline.

If you’re traveling without a car, the Mon Incline is easier to access, since you can easily walk to it from downtown and/or the South Side. The Duquesne Incline is a bit further away and would require more of a walk. 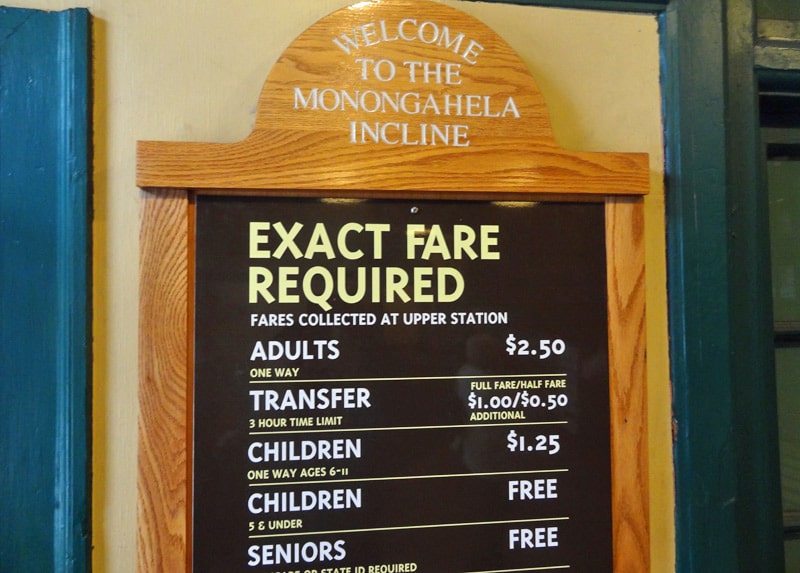 Note that the inclines do not have the same hours, and their roundtrip fares are slightly different.

For locals who live on Mt. Washington, the Duquesne and Monongahela inclines are just another form of transportation. They ride it like the bus or subway. It is their daily commute to downtown and back.

Can You Ride One Incline Up and Take the Other Down?

Sure, that’s a good way to experience both Pittsburgh inclines! It’s about a 20-minute walk between the two inclines, and you’ll be walking along Grandview Avenue in the Mount Washington neighborhood. It’s a beautiful walk, with the entire city view below you.

If you do decide to walk, note that there aren’t a lot of commercial businesses on this stretch. It’s mostly a blue-collar residential neighborhood, aside from the overlooks where you can walk out and see the city in all its glory.

Situated right between the two inclines is the Grandview Overlook on Mount Washington. It’s about a 10-minute walk from either incline, and it’s spectacular.

Give yourself some extra time to spend at the top of the mountain. USA Today once ranked the nighttime view from Grandview Avenue the second-most beautiful view in America, behind only Red Rock Country in Arizona! 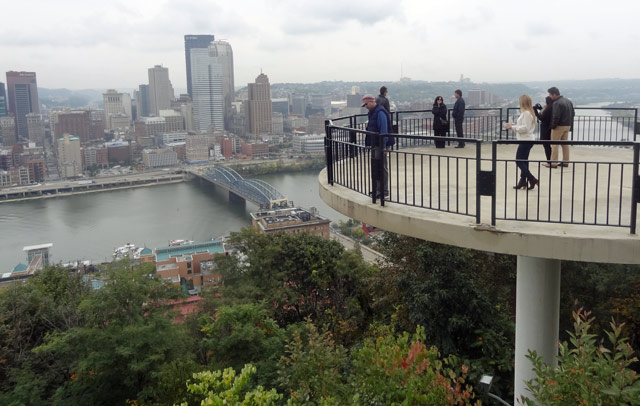 There are lookouts here for you to take in the city for miles in each direction and to pose for cute photographs with your significant other. If you’ve got the cash, there are a couple fancy restaurants up here as well.

If you ride the Duquesne Incline, make sure to also walk over to Points of View Park. You’ll find a statue of George Washington and some of the best views of the city up there.

History of the Inclines

Both inclines opened way back in the 1870s as critical means of transportation to take Mount Washington residents up and down the hill quickly. Don’t worry – the old cars and tracks have been restored many times over the years. 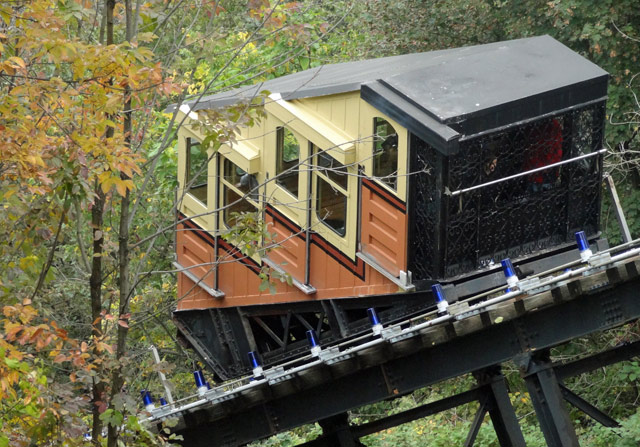 At one point, there were actually 4 passenger inclines serving Mount Washington. Since the flat areas of Pittsburgh were bustling areas of commerce, many people decided to live up on the hill.

The Monongahela Incline opened for service on May 28, 1870. It is the oldest continuously operating funicular railway in the United States! The fare at the time was 6 cents. The Duquesne Incline opened in 1877.

Other inclines were also built back in those days to transport cargo up and down the hill. Mount Washington was known as “Coal Hill,” since several coal mines operated at the base of the mountain.

In fact, there was a freight incline right next to the Mon passenger incline. The Mon freight incline was built in 1884 but dismantled in 1935 after McArdle Road was built to allow cars to drive to the top of the mountain.

Another funicular, the Castle Shannon Incline, continued operating until 1964. Here’s the full list of past and present funiculars in Pittsburgh history. 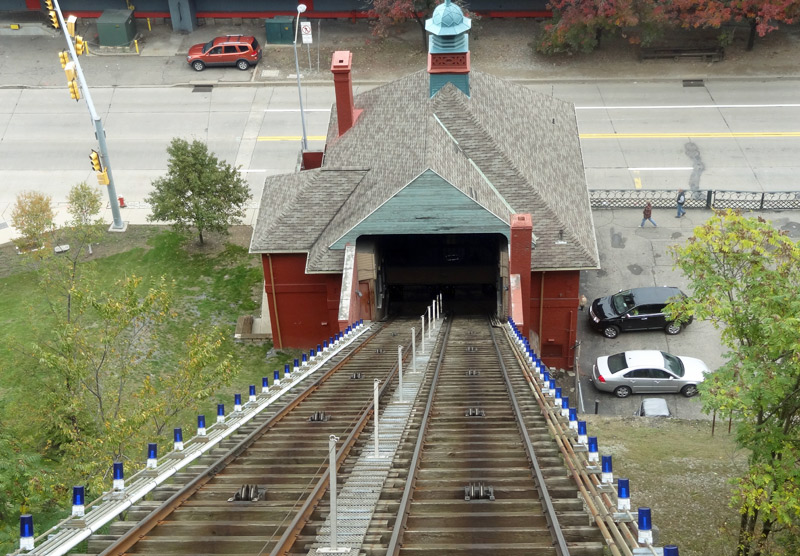 The Duquesne Incline actually closed in 1962 due to disrepair and declining ridership, but it was rescued by neighborhood groups and revived the next year.

Frequently Asked Questions About the Inclines

Do I need to buy a round-trip ticket or can I buy a one-way pass?

How do I pay for the incline tickets?

See the Port Authority page for the most current payment information. Both inclines accept cash, or you can use ConnecTix or ConnectCard transit passes.

Is there parking at the inclines?

There are paid parking lots at the base of each incline. If you prefer to drive to the top of the inclines, you’ll have to find street parking in the residential neighborhood, as there are no large lots up there.

Are the inclines historic landmarks?

They sure are! On June 25, 1974, the Monongahela Incline was added to the National Register of Historic Places. Nine months later, on March 4, 1975, the Duquesne Incline was given the same recognition. 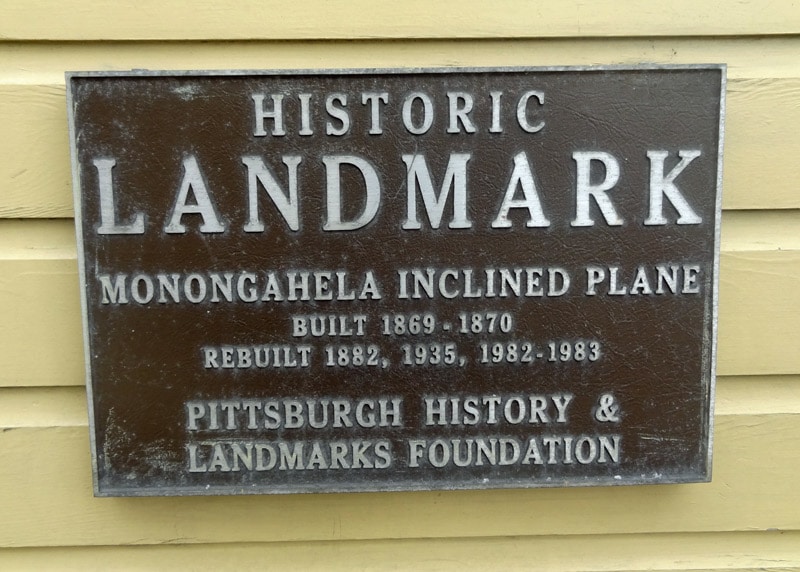 Do the inclines have visitor centers or gift shops?

There aren’t any official visitor centers, but the lobbies have a small number of signs, photos, and information for visitors. The Duquesne Incline has a gift shop with trinkets such as shot glasses, wooden ornaments, and framed photos.

Are tours of the inclines available?

The Duquesne Incline offers group tours, although they are on hold for now until the temporary health protocols are lifted.

What is the Society for the Preservation of the Duquesne Heights Incline?

This group was formed in 1964 by the folks who restored and restarted the Duquesne Incline two years earlier. The group has operated the incline since then, although it’s owned by the Port Authority.

How do you pronounce “Duquesne?”

It’s pronounced “Doo-KANE,” with the emphasis on the second syllable. Duquesne is a common word around Pittsburgh. From 1754 to 1758, there was a French fort at the confluence of the three rivers named Fort Duquesne. It was later replaced by Fort Pitt. Today, there’s a suburb of Pittsburgh called Duquesne, and Duquesne University is one of the city’s many secondary schools.

Where can I read more about the inclines?

Check out this book by Donald Doherty (Amazon link.) It has photos and historical information about not only these two inclines, but the other dozen or so funiculars that once existed in Pittsburgh.

Where to Eat and Drink Near the Inclines

Near the Duquesne Incline:

LeMont (1114 Grandview Ave): For fine dining with the best views in the city, Lemont is your choice. It’s just steps from the top of the Duquesne Incline.

Altius (1230 Grandview Ave): Another expensive but high-class option is Altius. The beautiful dining room has huge windows, giving every patron a view of the city. Expect elevated cuisine and $16 slices of apple pie.

Vue 412 (1200 Grandview Ave): Vue 412 (get it? it’s a restaurant with a “vue!”) serves new American dishes with cocktails. There’s a Dining Level, and a Lounge Level, so you could just grab a drink or two instead of shelling out for a full meal.

Near the Monongahela Incline:

Where to Stay: Lodging Near the Inclines

Sheraton Pittsburgh Station Square: The closest hotel to the inclines is the Sheraton at Station Square. It’s literally right at the foot of the Monongahela Incline. From there, you can easily walk downtown and to the South Side, so it’s an ideal location for visitors.

Stay Pittsburgh: This place is sort of like a really nice Airbnb, with private apartments available for rent by the night. It’s probably the cheapest hotel you’ll find in the vicinity of downtown, and it’s right across the Smithfield Street Bridge from the Mon Incline. If you like staying downtown and saving money, this may be for you.

For more reading about my awesome hometown of Pittsburgh, see the links below!

66 Things I Love About Pittsburgh

The National Aviary in Pittsburgh

The Cathedral of Learning Nationality Rooms

Guide to Attending a Steeler Game at Heinz Field

The Unmatched Sports Culture of Pittsburgh, The City of Champions