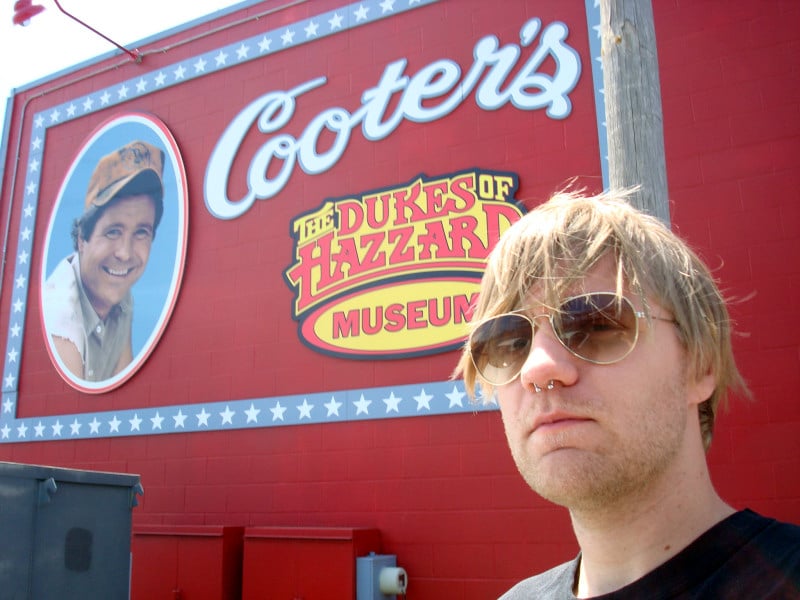 Cooter’s Dukes of Hazzard Museum
Location: Nashville, Tennessee (2613 McGavock Pike)
When to visit: 9 am – 8 pm on weekdays (open til 9 on Friday and Saturday)
Cost: Free to visit, small charge to pose inside the General Lee
Time needed: 30 minutes
Website: https://cootersplace.com/pages/cootersnashville

Children of the ’80s, rejoice! The Dukes of Hazzard has its own museum and gift shop in Nashville, where Bo, Luke, Daisy, Uncle Jesse, Boss Hogg, Rosco and even Cooter are celebrated. These famous characters from the seven-season tv show have their own museum.

Why is it called Cooter’s? Because the actor who played Cooter himself owns the place! That’s Ben Jones, who portrayed Cooter Davenport, the Hazzard County mechanic. Interestingly, Jones went on to become a U.S. House representative who represented the state of Georgia for four years in the early ’90s.

The museum has all sorts of memorabilia, merchandise and actual vehicles from the show. It’s great because I think most people who grew up in that era have some memory of the Good Ol’ Boys. I’m pretty sure I had a Hazzard lunch box.

Gatlinburg, Tennessee has one of these museums too, but this one in Nashville looks way cooler. Sitting outside is the General Lee itself, the 1969 Dodge Charger from the show. You can get your picture taken inside the vehicle for an extra charge – see pricing info below.

I don’t have any photos from the inside. This was one of the first places I visited when I began traveling and I wasn’t sure if cameras were allowed in. So rather than ruffle any feathers I just left the camera in the car. Ok, I admit it, I dropped the ball on this one. I was young and foolish. Don’t worry, it won’t happen again.

What will you see inside the Dukes of Hazzard Museum? Exhibits include props, photos, costumes, and more. You’ll see toy cars, action figures, and lots of other goodies.I was most excited about the Boss Hogg, Uncle Jesse, and Daisy Duke memorabilia, since those were my favorite characters. But Bo and Luke were alright too, I guess.

The Dukes of Hazzard Museum is total immersion into everything having to do with the classic southern drama. The museum is located on McGavock Pike, right near Cracker Barrel. Keep an eye out for special events, such as Good Ol’ Boys Fest, an annual gathering. 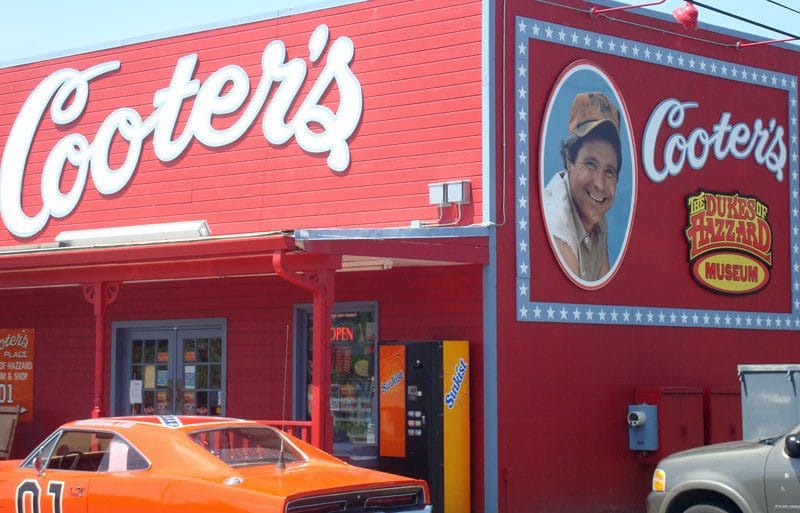 Cooter’s museum is open 9 am to 9 pm on Fridays and Saturdays. The rest of the week, it’s open 9 am to 8 pm. Those are generous hours, so there’s no excuse for not fitting in a museum visit if you make it to Nashville!

There’s a Dukes of Hazzard mini-museum in Gatlinburg as well, near the Smoky Mountains. The Gatlinburg location features a go-kart track and mini-golf course, in addition to a selection of costumes and memorabilia. UPDATE: As of 2020, the location in Gatlinburg has closed.

There are now two additional Cooter’s locations in Luray and Pigeon Forge, Tennessee as well. Cooter is just taking over the whole state, it seems!

While you’re in Nashville, don’t forget to check out the Lane Motor Museum, the Music City Walk of Fame, RCA Studio B, the Country Music Hall of Fame, and the Parthenon.

7 thoughts on “Quirky Attraction: The Dukes of Hazzard Museum in Nashville”