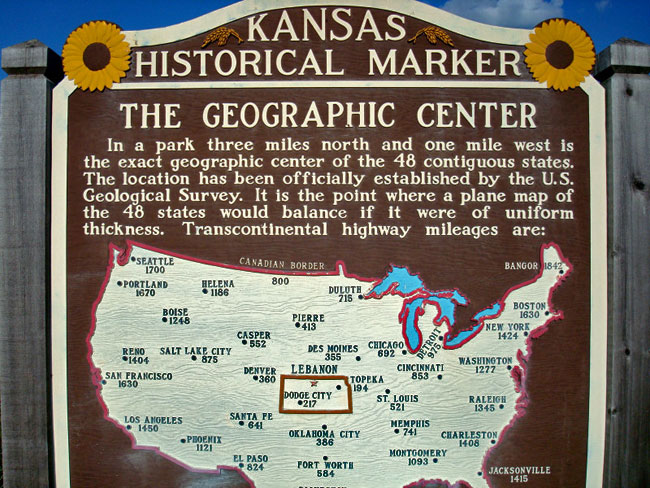 If you took a cardboard cutout of the lower 48 states and balanced it on top of a narrow object, where would the exact geographic center be? Turns out it’s near Route 281 and the town of Lebanon, Kansas.

I found this historical marker near Route 281 not far from the Nebraska-Kansas border. As noted, this spot marking the exact center has been officially established by the U.S. Geological Survey.

The marker itself is not the exact center of the U.S. As the sign notes, that spot is a few miles away. But this where they’ve chosen the recognize the geographic center of the United States, so this is where you can come to get your Instagram photos.

Even if you make it here, you still won’t be able to reach the “exact” center, because it’s on private property. Another marker has been set up in a public park, which as close as you can get to the true center of the U.S.

This is surely not something you’d drive miles out of your way to see. It’s not within 100 miles of anything, except for small farm communities. But if you find yourself driving through northern Kansas (I passed through while taking a purposely circuitous route from Denver to Omaha), you should at least pull over to the side of the road to get a photo. It’s pretty cool to say you’ve been at the (almost) exact center of the continental United States.

Don’t forget to check out some of the other attractions in Kansas, like the Keeper of the Plains statue, the Museum of World Treasures, and the rainbow house next to the Westboro Baptist Church.

8 thoughts on “Quirky Attraction: The Exact Geographic Center of the United States (Kansas)”