From fried grasshoppers in Mexico to chicken intestines on a stick in the Philippines, every country around the world seems to have a local culinary item that sounds awful to Americans.

In Iceland, that dish is hakarl, or fermented shark meat. Shark bodies are hung up for months to ferment, and then cut up into little bits and served without cooking. Yum?

Here’s how my shark-eating experience went down.

You’ll find a lot of unexpected animals on Icelandic menus, including horse, whale, jelly made from sheep brain(!), and puffin, those adorable black and white birds that hang around the coast.

Hakarl is the weirdest, though, and it had a notorious reputation. Many travelers have said it’s the most disgusting thing they have ever tried. Anthony Bourdain and Gordon Ramsay have expressed similar sentiments. I knew I would probably hate it, but I had to give it a shot.

I stopped in for dinner at Cafe Loki, a cozy restaurant directly across the street from the famous Hallgrimskirkja Church in Reykjavik. Cafe Loki serves “traditional” Icelandic cuisine, and they seemed to be one of the most affordable such establishments in the city.

Traditional Icelandic cuisine consists of a lot of lamb, seafood, and rye bread. Here’s a look at “Icelandic Plate II” from Cafe Loki: 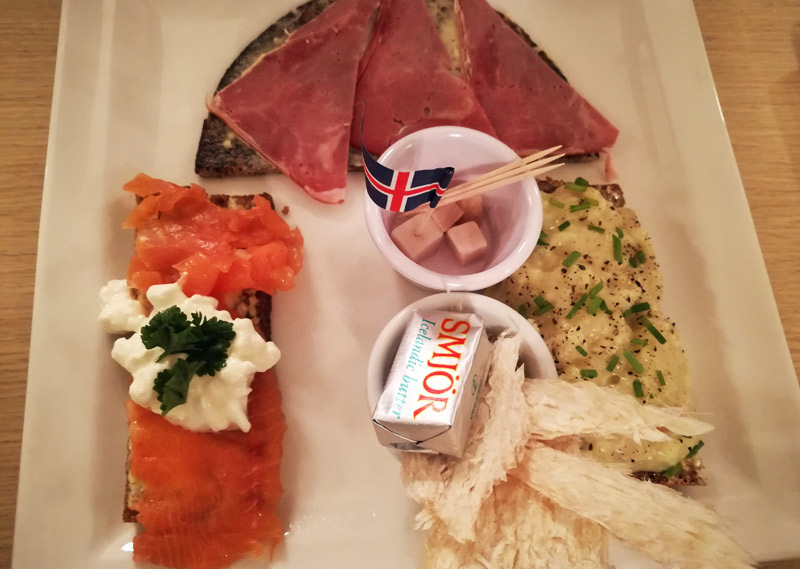 At the bottom is a cup of “dried fish” – it’s like jerky. And in the middle, proudly waving the Iceland flag, are the four little shark bits.

How to eat hakarl: My experience eating fermented shark meat

After gnawing down on a side of root vegetables loaded with more butter than you can possibly imagine, I finally worked up the courage to grab a fermented shark cube.

I’d heard that sometimes the shark reeks of an ammonia smell. But I did not detect much of an odor from my shark cube, which was a good sign.

There’s no big secret on how to eat fermented shark. Just go for it. I popped in the cube, chewed a bit, and swallowed it. 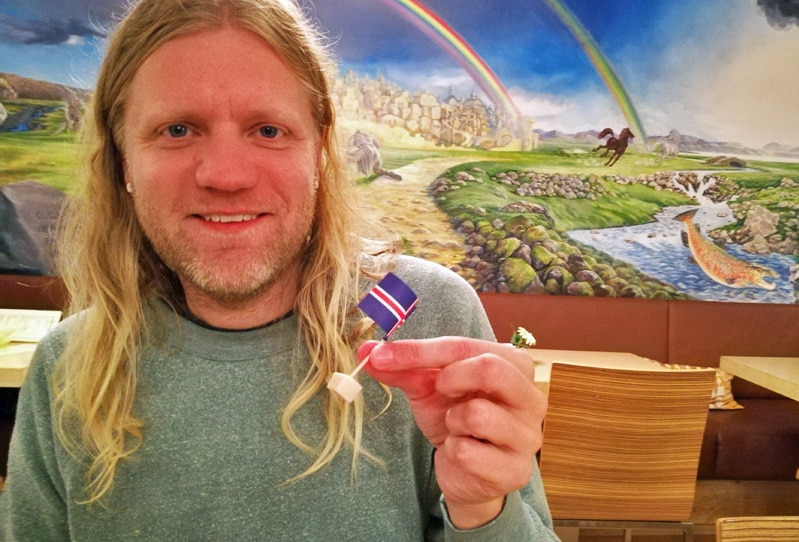 The verdict? Not particularly enjoyable, but not repulsive. Just kind of meh.

If you’ve ever had one of those snack packs with cubes of cheese and turkey, the shark bits were exactly like the turkey cubes in terms of texture and chewiness. The only difference was the flavor. It had a slight taste of fermentation, but not enough to totally gross me out.

I was almost disappointed that I didn’t find it as horrible as most visitors do. In fact I did something I would never have expected – I went back for a second cube. The second one was worse – the flavor of fermentation was a bit stronger. That leads me to believe that not all cubes taste exactly the same.

Would I eat hakarl again? Sure. I actually enjoyed the fermented shark meat about as much as the Icelandic hot dog (awful chewy casing) and the popular local drink Skyr (awful acidic yogurt flavor.)

Where do the sharks come from?

Many environmentalists protest the presence of whale on Icelandic menus, arguing that it’s mostly tourists who eat whale and that killing the animals isn’t necessary.

As far as I can tell, there are no such protests over the shark, since shark remains (somewhat) popular among locals. No, most Icelanders don’t sit down to eat shark dinners every night, but most grocery stores sell bags of frozen fermented shark, so somebody must be eating it. 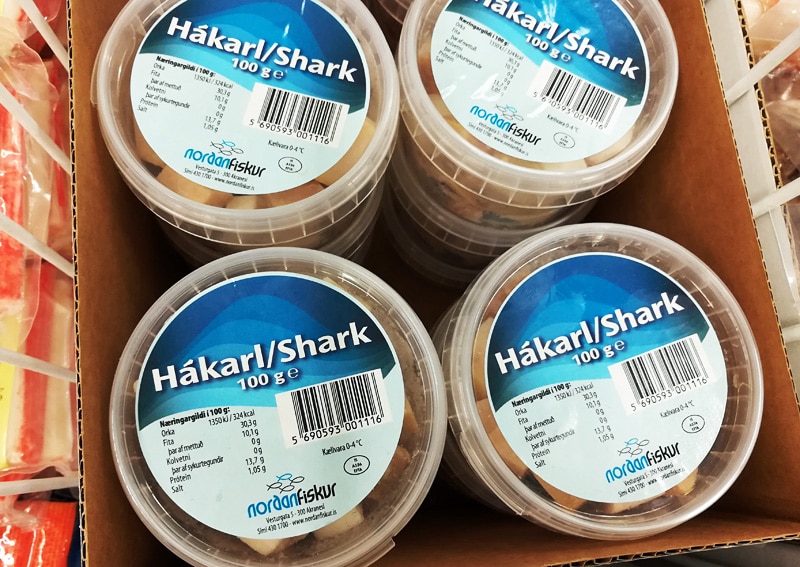 The sharks are mostly “Greenland shark” – that’s the actual name of the species. The shark corpses are placed in a hole underground for at least six weeks to ferment and drain the poisonous juices that would make you sick if eaten raw.

Then, the shark is removed and hung to dry for four months or more. Eventually, it’s cut into cubes and sent to markets or restaurants. You can even visit a quirky museum (Bjarnarhöfn Shark Museum) to see the fermentation process in action.

Shark costs a lot at Icelandic restaurants. If you’re interested in trying it, a side of four cubes of hakarl went for $5 at Cafe Loki, which was the cheapest price I could find. Go to Cafe Loki if you’re looking for a cheap place to eat fermented shark in Iceland. Or just buy it in the grocery store.

Would you try fermented shark meat?