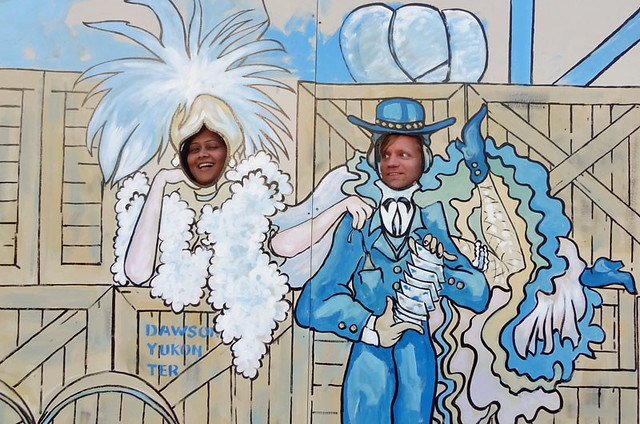 I’ve already revealed how much I love Dawson City, Yukon and how I would love to live there. This town of fewer than 2,000 residents just eight hours south of the Arctic Circle has a surprising number of fun activities.

Now it’s time focus specifically on things to do in Dawson City. Here’s a rundown of some of the quirky activities and sights that Dawson has to offer.

Quirky and Fun Things To Do in Dawson City

Hike to the Midnight Dome

Numerous hiking trails can be found in the hills surrounding Dawson City. One trail leads up to the Midnight Dome, the highest spot overlooking the city and a place where the sun doesn’t set in the summer. 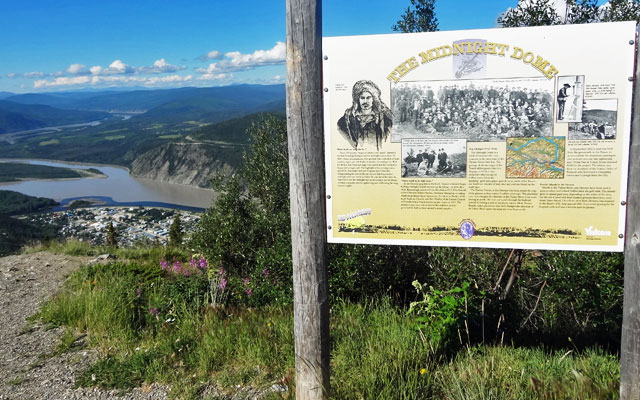 The trail cuts right across the ancient landslide that is a signature part of the hillside behind Dawson City. Looking up at the hill from below, it’s hard to tell that there’s an actual horizontal trail that goes right across the rock slide.

Once you’re at the top, enjoy the views. Give yourself at least a few hours for the round-trip hike to the dome and back, and remember that this is bear country, so be prepared. You can also drive to the top of the dome.

The heart of the Gold Rush was in Dawson more than 100 years ago, and they’re still finding gold here. Not nearly as much as they used to, but enough that gold mining is still one of the city’s biggest industries.

Tourists can partake in the gold panning experience by heading to one of the open claims areas where anyone can search for gold, or by joining a gold panning tour.

If you’re wondering whether people can actually find gold on these tours, the answer is yes. Usually, it’s just tiny pieces worth no more than a few bucks, but one recent guest found a small nugget valued at about $200, so the dream of striking it rich lives on!

For such an isolated city, Dawson has a surprisingly rich history when it comes to famous authors. ‘The Call of the Wild’ author Jack London spent time here in a cabin in the forest, soaking in the seclusion of a Yukon winter. 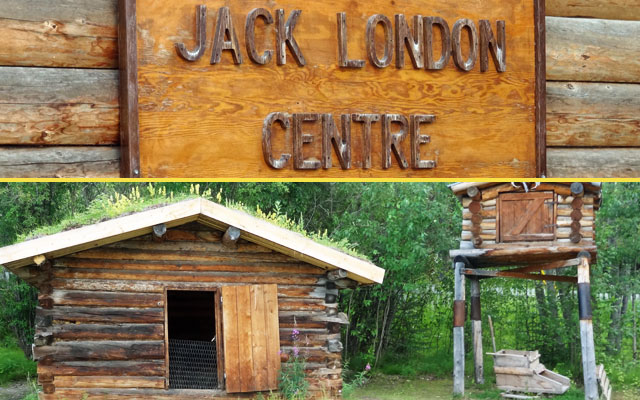 Decades later, his cabin was found in the woods and moved to the city itself, where it has become a museum with artifacts and photos from his life. The site even has a copy of a gold claim he made in 1897 on Henderson Creek.

London’s restored cabin now makes up part of Writers’ Row on 8th Avenue. Also on the block is the childhood home of author Pierre Berton, which is now a retreat for writers in residence, and the Robert Service Cabin, where the famous author lived from 1909 to 1912 as he was writing poetry that captured the spirit of the Yukon. 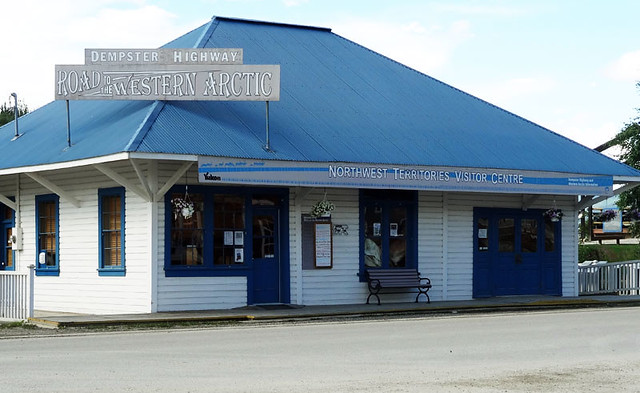 With three stage shows a day featuring singing and dancing can can girls, Gerties is much more than a casino. The throwback entertainment creates an atmosphere that feels more like 1920 than 2020. 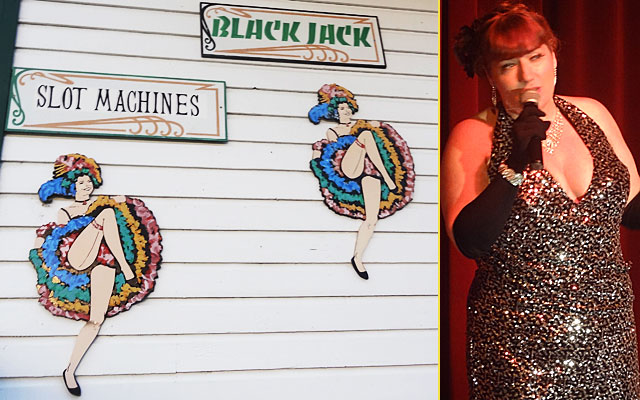 The casino is the oldest in Canada and has the typical assortment of slot machines and poker tables. I tried my hand at the slots but quickly lost my $10, though I did hear quite a few stories of other players walking away with sizable winnings.

The best way to get to know Dawson is with a walking tour. What makes this tour quirky is that guides from Parks Canada and the Dawson City Visitor Center often wear 1890s attire and present the tour in character as original Dawson settlers.

The tour hits up historic spots around downtown Dawson like the old bank, where cash was given in exchange for gold, and a former saloon restored to its 1904 condition.

The tour also passes a series of small cabins where the ladies who used to work at Dawson’s brothels would live. Since most of the Gold Rushers in those days were men, women were in short supply (and high demand) in Dawson City.

Local officials allowed the brothels to operate as long as the women paid a monthly fee and got regular health checkups. It’s these kind of enlightening details that make the tour worth your time.

The Yukon River has a huge influence on the town. You can relax aboard the only remaining paddleboarder in the Yukon on a Klondike Spirit Dinner Cruise. The cruises provide a nostalgic atmosphere and can hold up to 50 guests. They run from May to September each year. 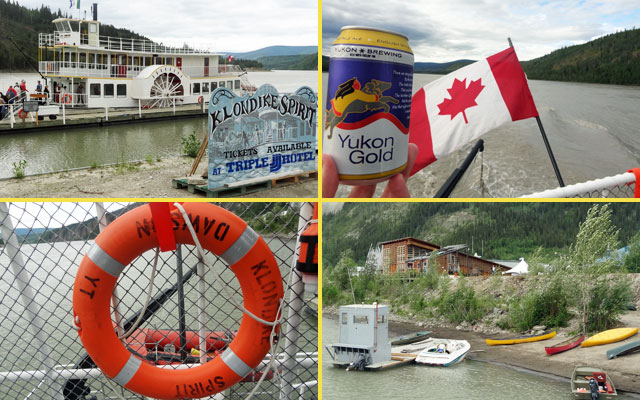 Alternately, kayaking and canoeing are possible on the river. Be sure you can take care of yourself, because the current can be fast!

Ferry Across the Yukon River

If you’re not going to cruise on the river, at least take the ferry. Because there’s still no bridge over the Yukon River in Dawson City, the solution is the George Black Ferry, which shuttles cars and pedestrians across the water all day. It’s a small ferry and a short trip – just right for a town of this size. 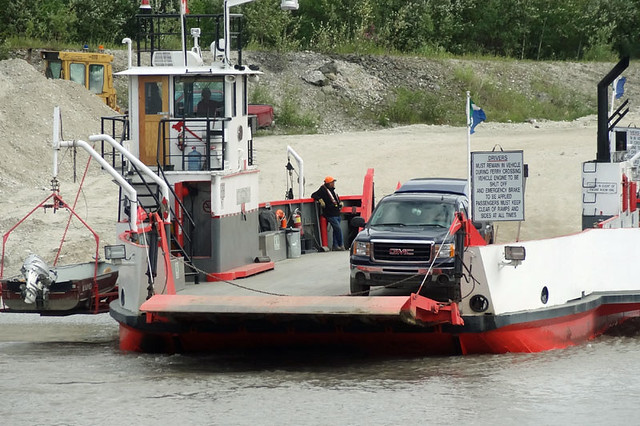 Here’s something fascinating. Every winter, in late October or early November, the river starts to freeze, and the ferry is taken out of service. It becomes impossible to cross the river, and the west side of Dawson is cut off from the rest of town. After 2-3 weeks, the river freezes solid, and it’s safe to drive across the ice. How cool is that?

There are a lot of dog races in this part of North America, with the Iditarod in next-door Alaska and the local Yukon Quest, a 1000-mile race between Whitehorse and Fairbanks.

Some of the dog mushers are based in Dawson City and offer tours of their sled dog kennels, where you can meet the dogs and learn about the sport. 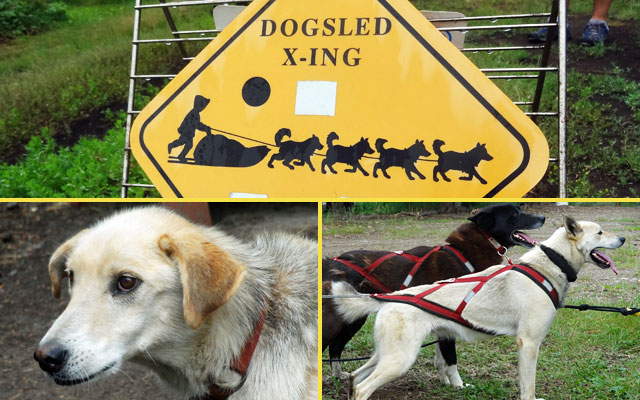 In the winter, you may be able to guide a dog team of your own (with assistance from a professional) on a short ride. In the summer, with no snow on the ground, it’s not possible to see the dog sleds in action, but you can see how they work by watching a dog team pull an ATV.

The Dawson City Museum displays artifacts that help explain the history of the Yukon. Exhibits include the tusk of a woolly mammoth,  gold panning equipment, a re-created casino, and photos of some of those brothel workers who lived here in the early 1900s. 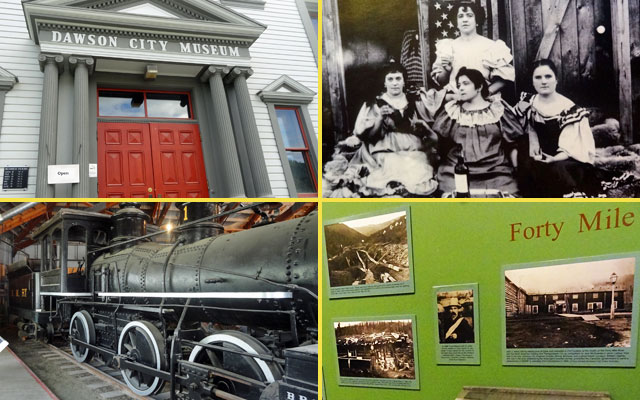 Next to the Dawson City Museum is a separate building housing trains that were used on an old railway. Today, there is no rail access to Dawson, but for a brief period 100 years ago, the Klondike Mines Railway brought visitors to town. The railway ran for seven years starting in 1906, and this building details the history of that railroad. 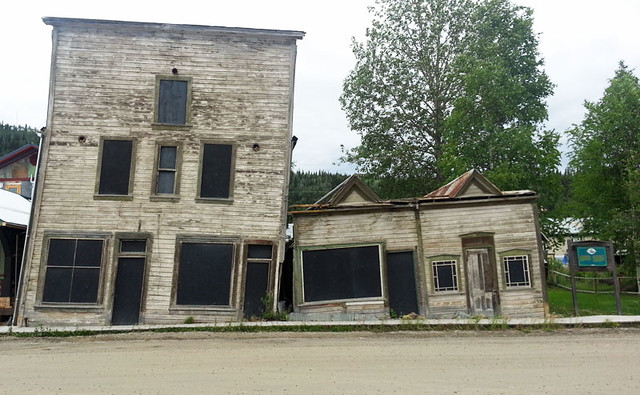 Walk down 3rd Avenue and you won’t miss the Kissing Buildings. These structures were built in 1901, and a century of the ground freezing and thawing each winter has caused them to tilt right up against each other. This is a quirky Dawson City attraction that you won’t find anywhere else! 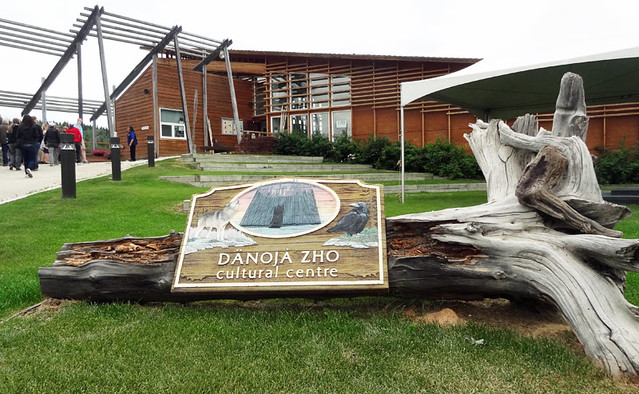 The Danoja Zho Cultural Centre is a great place to get educated about the First Nations who inhabited this area before white settlers came through during the Gold Rush. Informational displays and exhibits teach visitors about the Tr’ondëk Hwëch’in and their way of life. 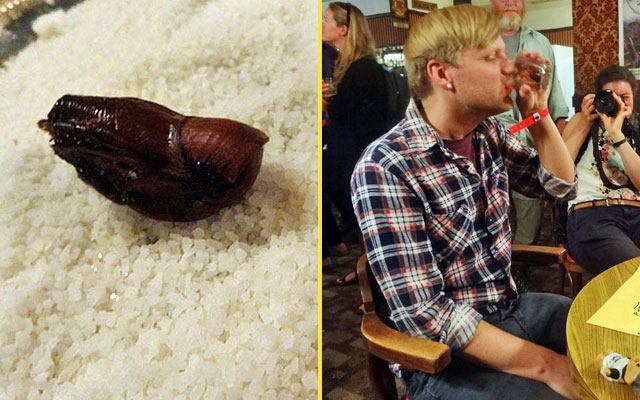 Last but certainly not least is the Sourtoe Cocktail experience, which involves drinking a shot of whiskey that contains a real mummified human toe. It’s a bizarre ritual, but you’ll get a cool story that you can tell for the rest of your life. Visit the Downtown Hotel to make it happen.

Getting Around Dawson City

With just a few exceptions (such as the gold panning and dog mushing), most of these Dawson City activities are right in the heart of town, which means you can walk to all of them. The town is small and it’s easy to walk from one side to the other.

The drive to Dawson from Whitehorse is between 5 and 6 hours, but it’s worth it. If you have a chance to make it to Dawson City someday, go for it!

Note: My visit to the Yukon, Canada was made possible by Tourism Yukon.

Which of these quirky things to do in Dawson City would you most want to try? 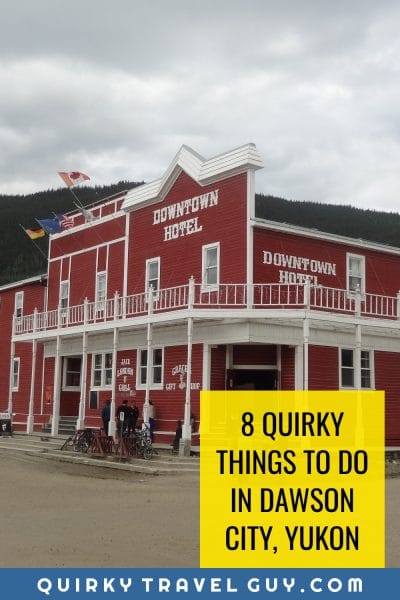 10 thoughts on “13 Fun and Quirky Things To Do in Dawson City, Yukon”