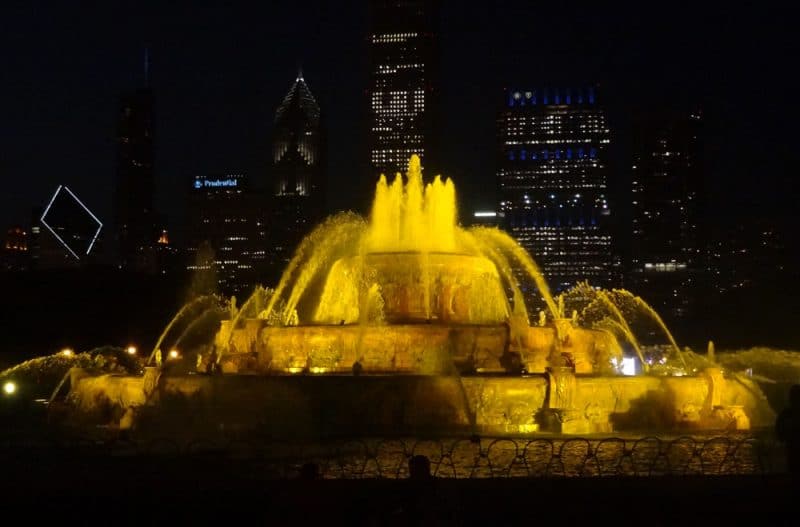 Chicago was my home for eight years! If you’re visiting the Windy City, you’ll probably spend your days checking out museums and tourist attractions like the Bean and the lakefront. But when the sun goes down, what are the most fun things to do in Chicago at night?

Evening activities in Chicago vary dramatically based on time of year. In the summer, you can find a lot of cool things to do since the warmer weather is more conducive to late night activities.

But during the frigid winter temperatures, almost all of the best places to go at night are indoors.

Here’s a rundown of my most recommended suggestions for nightlife, comedy clubs, shopping, restaurants, and other awesome points of interest for those seeking to go out in Chicago at night.

Below, check out the top-ranked tours at night in Chicago from our travel partner, Get Your Guide.

Fun Things To Do in Chicago at Night: Tourist Attractions

Which Chicago tourist attractions are open at night? Start with the free Millennium Park and the famous metallic Bean sculpture in downtown Chicago.

The park technically closes at 11 pm everyday, though it’s hard to imagine anyone caring if you stroll by at midnight to grab a couple selfies with the Bean. Millennium Park also has free outdoor evening concerts quite often during the summer.

The Willis Tower Skydeck remains open until 10 pm everyday and midnight on Saturdays. Go up there and conquer your fear of heights by walking out onto the clear Skydeck ledge!

Another of the best places to go in Chicago at night is the Hancock Tower. The observation deck takes guests up to the 94th floor until 11 pm, while the Signature Room, a classy bar on the 95th floor that offers the same awesome views, stays open until midnight.

Note – these times are accurate as of this writing in 2022; check venue websites for updated information, as hours may change.

Most Chicago museums close before night time, but some have later hours on specific days of the week. For instance, the renowned Art Institute of Chicago stays open until 8 on Thursday evening.

The Chicago History Museum, Adler Planetarium, and Museum of Science & Industry all have occasional “Happy Hour” events that go until 9 or 10 pm.

And the Shedd Aquarium has a ton of “After Hours” events for adults until 10 pm, like salsa dances and game nights.

The Lincoln Park Zoo is open late on some Friday nights during the summer for adult events that offer alcohol. Not a bad date idea! While the zoo is normally free, paid tickets are usually required for these events. The zoo also has craft brew tastings and wine fests for those over 21 during the summer.

Another great summer option for those under 21: Navy Pier. That’s where you’ll find a big shopping center and a giant ferris wheel. On Wednesday and Saturday nights during the summer, this touristy part of the city has fireworks shows after dark.

And finally, while finding fun things to do in Chicago at night during the winter is a real challenge because of the cold weather, the city operates a couple of outdoor ice skating rinks, one at the Bean and one at Wrigley Field.

You can rent skates and glide around the ice as late as 10 pm, depending on the day.

Cool Things To Do in Chicago at Night: Bars and Nightlife

The Green Mill is a must-visit for Chicago tourists. It’s the old-time jazz club (opened in 1907!) that Al Capone used to frequent. Today, they still play music straight out of the ‘30s and ‘40s. You’ll totally be transported to a different era inside here.

The city also has a number of good blues bars for fans of that genre. Consider Kingston Mines, Blue Chicago, B.L.U.E.S., or Buddy Guy’s Legends.

For cool, hipster dive bars, check out Skylark in Pilsen, Slippery Slope in Logan Square, or Rainbo in Wicker Park. For popular breweries, try Revolution Brewing in Logan Square, Goose Island in Lincoln Park, or Half Acre in Lincoln Square. For LGBT hotspots, hit up the Boystown section of the Lakeview neighborhood.

And for karaoke, try Alice’s bar in Avondale. They’re open late and offer karaoke several nights a week, with a crowd of regulars who are really good singers. Bring your A game if you plan on belting out a tune here!

The Windy City is home to one of the largest shopping areas in the country. Known as the Magnificent Mile, the region stretches for about a mile on Michigan Avenue just north of the Chicago River. The Mag Mile encompasses more than 450 retailers of all kinds.

The large Water Tower Place mall is open until 9 pm everyday except Sunday. As for the shops not located in malls, each store on the Mag Mile sets its own hours. Most close by 9 pm, but you can find exceptions.

The Macy’s at Water Tower is open until 10 on weekends (and even later during the holiday season.)

While you’re in the area, walk past the Tribune Tower, which has become a quirky attraction thanks to the chunks of famous worldwide structures (Great Wall of China, the Alamo, Berlin Wall) embedded into its exterior.

When it comes to food, Chicago has some of the most incredible culinary destinations in the country, many of which are open into the late evening.

I couldn’t even begin to describe all of the award-winning Chicago restaurants, but this article from Eater is a good start.

I will mention a few personal favorite food spots that are open late: the acclaimed West Loop hotspot Girl & the Goat (open until 11pm), Piece Brewery & Pizza in Wicker Park, the comfort food of Little Bad Wolf in Andersonville, the modern taqueria Big Star in Wicker Park, and the upscale bar food at Longman & Eagle in Logan Square. Also get that chocolate cake shake at Portillo’s and try a deep dish pizza somewhere!

And for very late dining after the bars close, there’s always the Wiener’s Circle – the wacky hot dog stand (open until 4 am) where the employees berate and insult the customers.

Organized tours are an especially good thing to do for families and other Chicago visitors under 21, who won’t be admitted to many of the bars and venues listed above. Believe it or not, there’s a wide range of options for night time tours in the Windy City.

You can soar above the city to check out the night lights in a helicopter! You can go on a “haunted Segway” tour that visits several supposedly haunted spots in Chicago. You can take a dinner cruise on Lake Michigan.

Or you can join a “Chicago Crimes” tour that covers Chicago’s mob history at spots like the Biograph Theater, where John Dillinger was famously taken down by the FBI in 1934.

Other Fun Things To Do in Chicago at Night: Sports, Concerts, Comedy

Chicago gets a ton of great concerts. That’s one of the reasons I moved there, in fact. I got to see legends like Paul McCartney, Prince, Leonard Cohen, Aretha Franklin, Tony Bennett, Madonna, and more.

The city has some famous old venues, from the venerable Chicago Theatre to smaller clubs like the Empty Bottle. Do a Pollstar.com search for “Chicago” to check out the concerts on the dates of your visit.

Sports are always an option. Check out a Cubs game at Wrigley Field if you can snag a ticket. White Sox tix are easier to come by, and the view of the Chicago skyline from the Sox’ park is fantastic.

If you’re here during the winter, take in a Bulls and Blackhawks game.

And finally, don’t overlook the fantastic comedy scene in Chicago. So many Saturday Night Live regulars got their start at the improv venues of Chicago.

Second City is the obvious place to take in a show, but also consider some of the smaller theaters around the city, as well as regular theater shows like Blue Man Group. Here’s a lengthier guide to Chicago’s comedy scene.

Best Places To Go in Chicago at Night By Yourself

This section is just for my fellow solo travelers! Going out at night alone in a new city can be a bit intimidating, but many of the earlier suggestions are great places to go in Chicago by yourself.

The Willis Tower or Hancock Tower can be enjoyed alone, though you’ll want to have a selfie stick or ask someone to snap a quick photo of you while you’re up there. All of the museums are great for exploring by yourself, especially the Art Institute. You could spend hours in there checking out the famous paintings and sculptures.

Theater shows and concerts are great solo events, and so are the organized walking tours. Going to bars alone can be trickier, since it’s not always easy to meet people, but places like the Green Mill or Alice’s might be your best bets for a solo late-night excursion.

Also be on the lookout for summer street festivals. Several neighborhoods across Chicago have weekend street fairs with food and live music going well into the night.

No matter when you visit, you’ll find several cool things to do in Chicago at any time of year, whether alone or with a group of friends.

Got any additional suggestions that I missed? Leave a comment below and let me know!

The Best and Worst of Chicago According to Quirky Travel Guy

Scenes from the Garfield Park Conservatory in Chicago