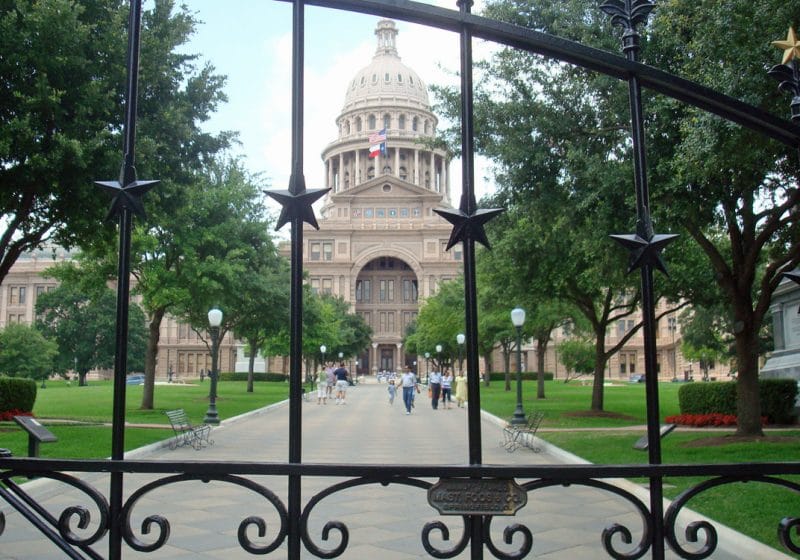 Residents of southern California are lucky because they have so many road trip options. They can wind up the Pacific Coast to San Francisco on Highway 101. They can drive east to Phoenix or Vegas, or head straight for national parks like Yosemite and Joshua Tree.

But my favorite drive out of LA is going to Austin, Texas. It’s such a great drive through deserts and mountains, with a chance to visit national parks, urban centers, ghost towns, and more. 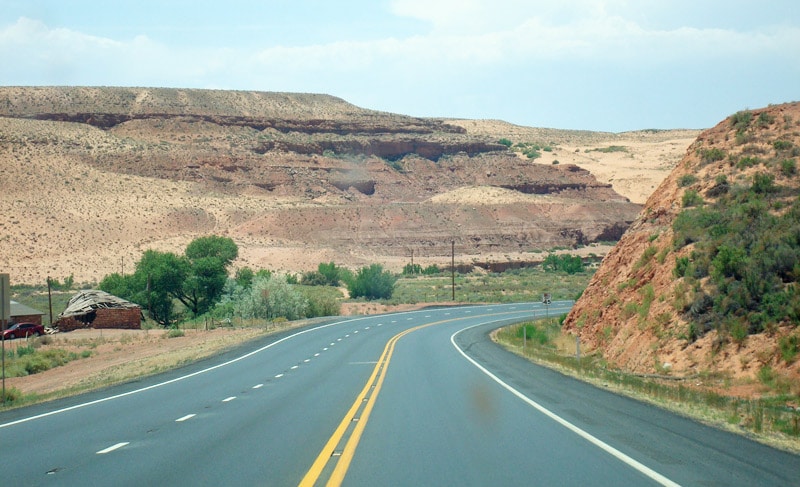 Such a trip requires two days at a minimum. It can easily take more than a week if you take a leisurely pace and spend lots of time at the points of interest along the way.

In this article, I’ll present two Los Angeles to Austin road trip options. One (my recommended route!) takes a meandering northern route that hits multiple big cities and national parks. The other is the quickest and most direct route, if you just want to get there as soon as possible.

As with every car voyage, remember to bring sufficient road trip snacks, and pack the necessary essentials for safety and comfort. And don’t forget to stream a playlist of road trip songs!

Here’s a map of the route I prefer when doing a Los Angeles to Austin drive. This is not the most direct route; in fact, it requires 34 hours of driving, which is 14 more than the fastest path.

But I love this road trip because it allows you to visit a bunch of other cool attractions, including the cities of Las Vegas and Albuquerque, the UFO-crazed town of Roswell, and four national parks: Death Valley, Carlsbad Caverns, White Sands, and the Grand Canyon! If you’ve never actually spent time at the Canyon, here’s the perfect chance.

This trek covers 2053 miles. Follow along as we hit the major highlights along the way! 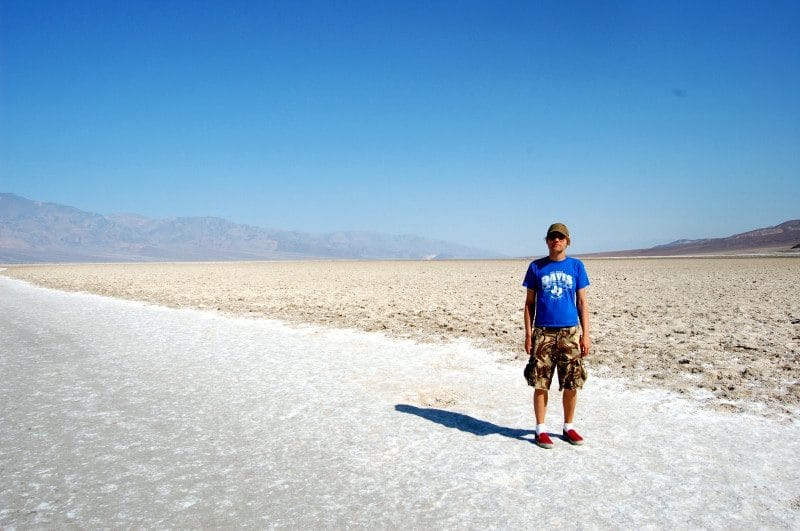 About 3.5 hours outside LA, Death Valley should be the first stop on our road trip to Texas. There are lots of cool things to do in Death Valley, depending on what time of year you visit.

If your visit is during summer, it may be too hot to do any serious hiking. But you can still drive to Artist’s Palette, stop by Badwater Basin, and camp overnight at Furnace Creek Campground.

The Ghost Town of Rhyolite, Nevada 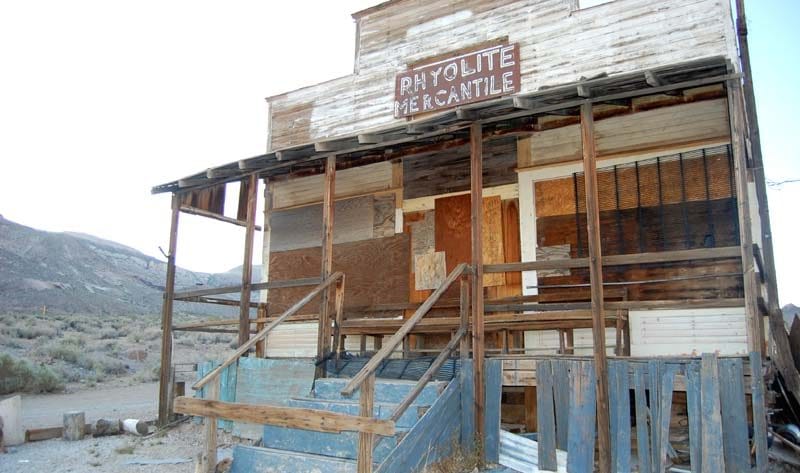 On your way out of Death Valley, swing through Rhyolite. This former mining town was abandoned by 1920, but many of its wooden and concrete structures remain, including the schoolhouse, train station, and jail. It’s one of the best ghost towns you can still visit today. 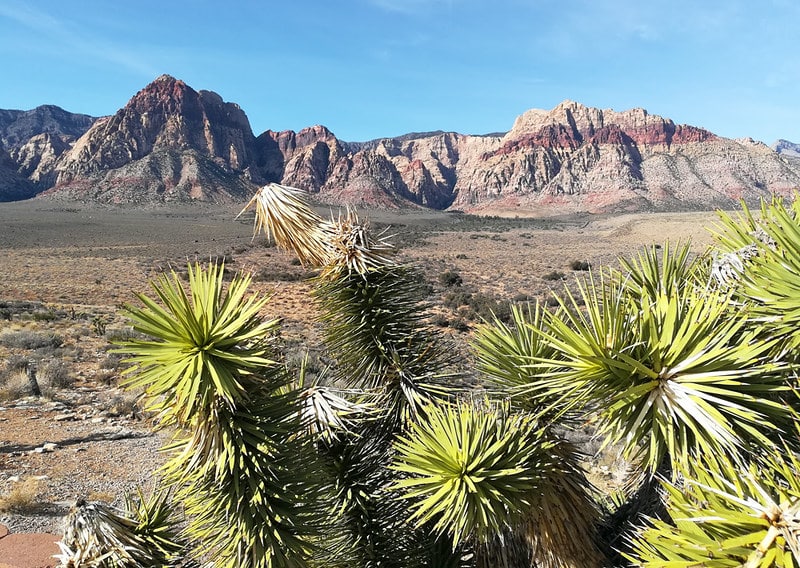 I highly suggest that anyone passing through the Vegas area check out Red Rock Canyon. Do some non-technical rock climbing, view 800-year-old petroglyphs, and see the brilliant orange and red rocks up close. The $15 entrance fee is worth it for the journey on Scenic Drive. 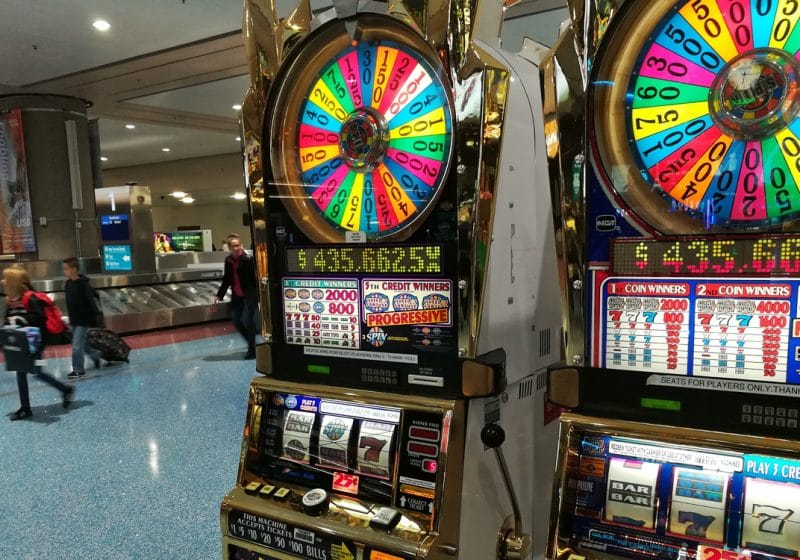 I shouldn’t have to give you suggestions for what to do in Vegas! Embrace the ridiculousness of this city. Hit the slot machines and poker tables, catch a live show, or do whatever your heart desires in Sin City. Lodging is surprisingly affordable, especially Airbnbs and hotels away from the strip.

This northern route takes us briefly into Utah and the city of St. George, a decent place to stop for a bite to eat or a hotel room for the night.

Then comes Colorado City, Arizona, a truly freaky place where religious polygamy is the norm and the women and girls wear pastel-colored dresses that extend below their ankles. Driving through this town was a surreal experience, as it seemed hard to believe such a place could exist in America today. 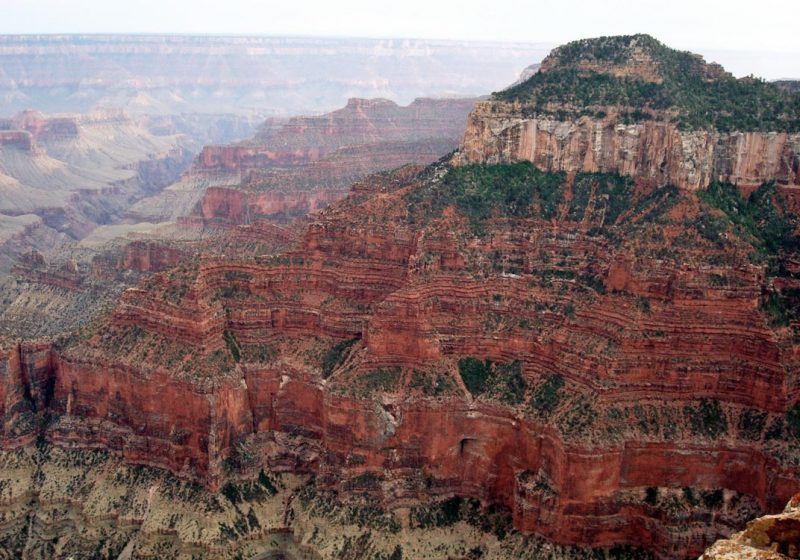 This route directs you to the Grand Canyon’s lesser-seen side, the North Rim. This side of the Canyon has more diverse landscapes than the South Rim. Here, temperatures are cooler, so it’s easier to hike places like the North Kaibab Trail. There are dense forests, and there’s even snow in winter. Those Canyon views are just as spectacular!

The longest stretch of this road trip to Texas will be between the Grand Canyon and Albuquerque. It’s 470 miles and eight hours, and there isn’t much to see along the way except a few distant mountains passing through the Hopi Reservation in eastern Arizona.

Once you reach Albuquerque, though, you’ll find comfortable weather, vibrant neighborhoods, surprisingly robust nightlife, great food, and tons of outdoor activities. I consider Albuquerque one of the most underrated cities in America. Spend a day or two here! 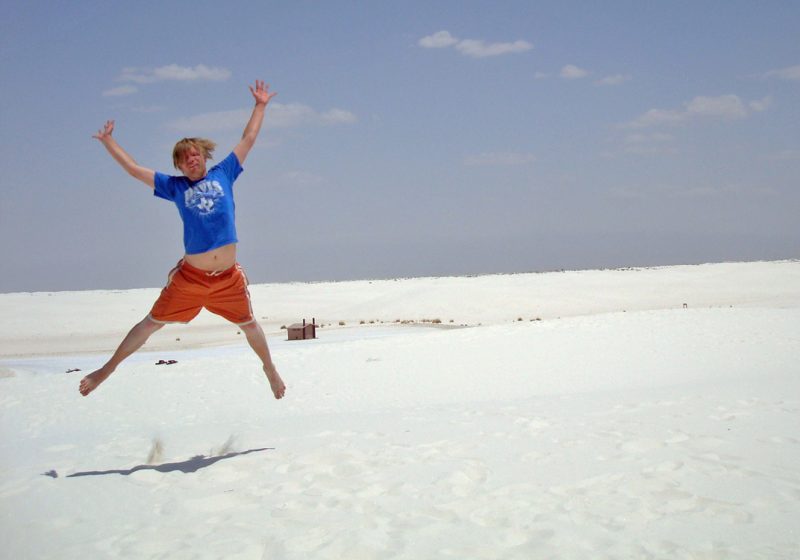 White Sands just became a national park within the past couple years. It has one of the most unique landscapes in the U.S. The park has sand dunes composed of white gypsum sand. This sand is so fine that it dissolves in water, but because it almost never rains here, the dunes stay intact. You can play in the sand and even ride a sled down the dunes if you like.

For the better part of a century, Roswell has built its existence around the fact that aliens allegedly landed here in 1947. Alien-themed gift shops are everywhere. Local fast food joints have signs declaring “Aliens Welcome.” The outdated UFO Museum leaves a lot to be desired, but the museum and the city are still worth seeing for the novelty factor. 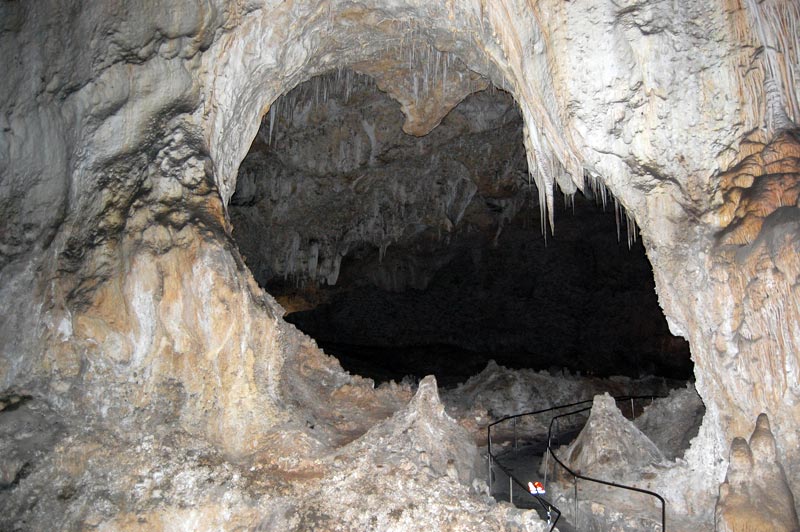 Hike 750 feet straight down into the ground to view limestone caves at Carlsbad Caverns. The “Big Room” has stalagmite and stalactite formations that are thousands of years old. To check another national park off your list, head south for 40 minutes and cross the border into Texas to reach Guadalupe Mountains NP. 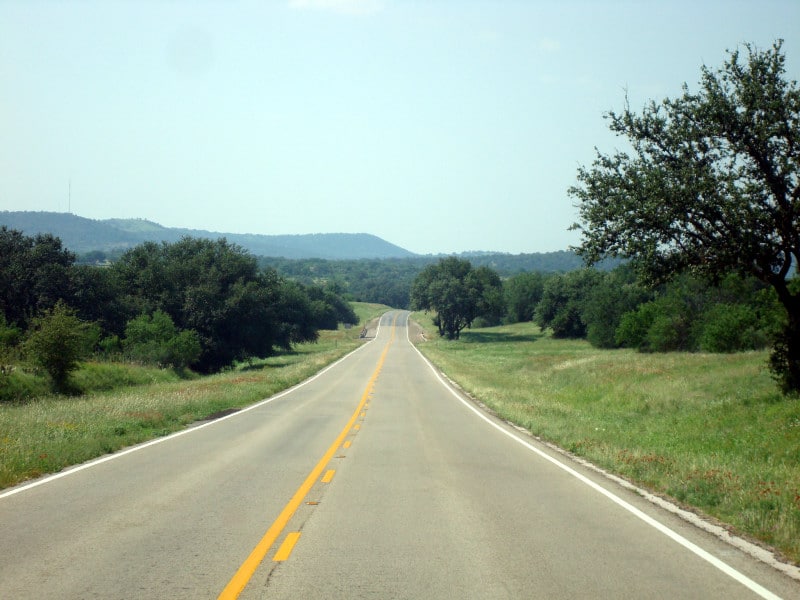 The Los Angeles to Austin road trip closes with an 8-hour drive between Carlsbad and Austin. This slice of western Texas has a lot of two-lane roads, cattle ranches, and small towns. You may see an occasional emu ranch or old-time cemetery. But otherwise it’s not the most exciting part of the country, so you can drive this stretch straight through in one day.

Finally you’ve arrived! Hopefully your road trip to Texas has been memorable and satisfying. Have fun in Texas capital city and don’t forget to check out the famous bridge bats!

When you’re all done, turn around and go back from Austin to Los Angeles!

Fastest Route: LA to Austin via Palm Springs and Phoenix

If you’d rather take the most direct path from Los Angeles to Austin, here’s the itinerary for you. Spend a night each in Palm Springs, Phoenix, and El Paso for a tidy four-day road trip to Texas.

This route covers 1377 miles and takes just over 20 hours of driving. These should be your main pit stops along the way. 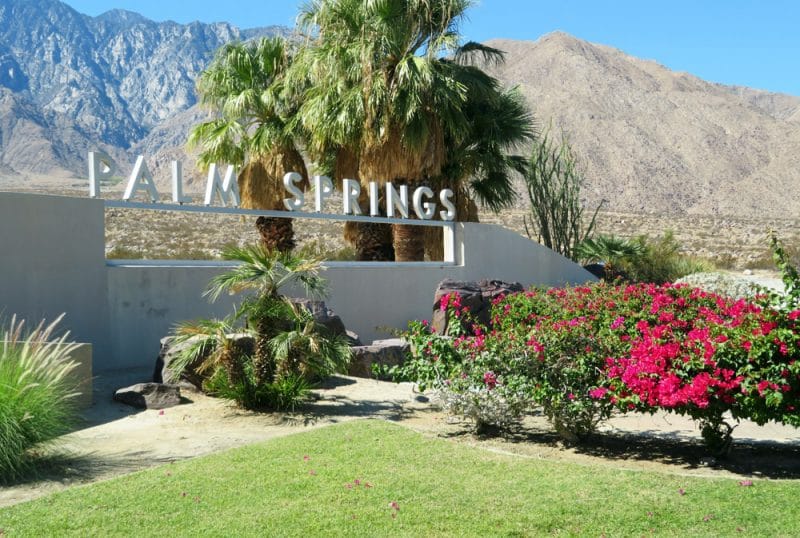 The desert city of Palm Springs has a reputation for catering to older folks, but it’s actually a lot of fun. Ride the aerial tram to the top of the mountain, take a celebrity house tour, or visit a windmill farm. I’ve created an extensive list of Palm Springs activities for those who need more suggestions! 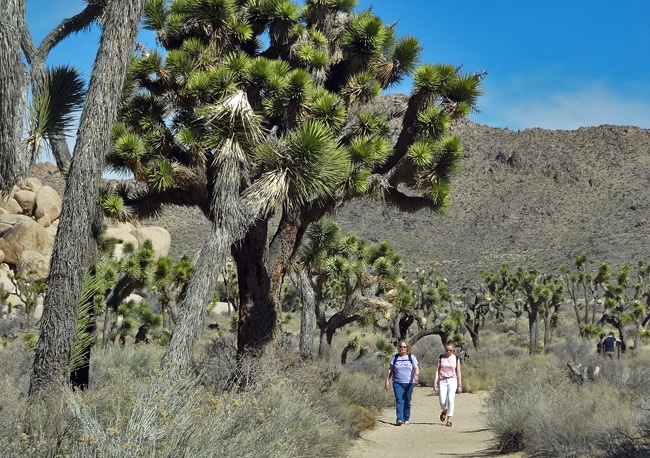 Joshua Tree is a fun park with some good hikes, the Keys View lookout point, and a natural climbing playground known as Jumbo Rocks. Don’t worry – one day in Joshua Tree is all you need to fully explore the park. 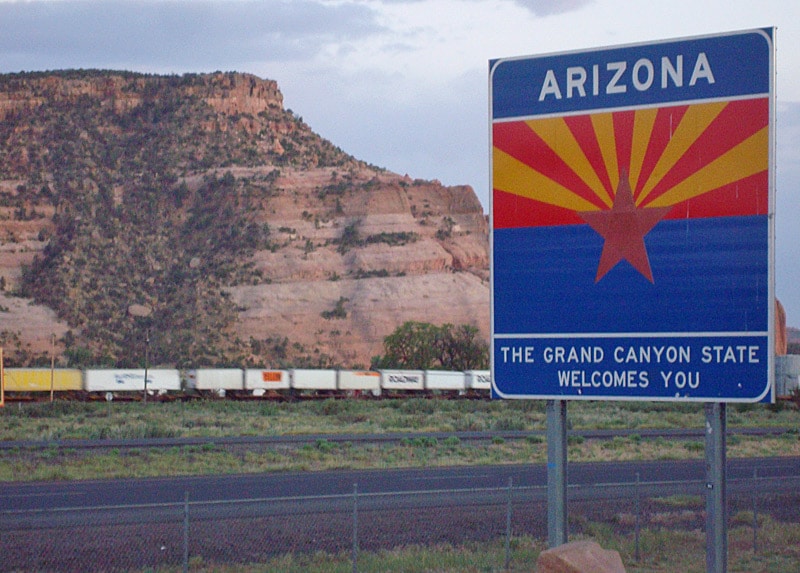 Drive 3.5 hours east and you’ll reach Phoenix, the largest city in the desert. Did you know Phoenix is the 5th-largest city in America, behind only New York, LA, Chicago, and Houston? It’s the perfect spot to spend the night on your road trip to Austin. Explore the city’s museums, breweries, and restaurants while you’re here.

Saguaro National Park is an interesting place because it consists of two sections, broken up by the city of Tucson in the middle. Explore the hiking trails and check out the giant cacti that give the park its name. The sunsets are beautiful here! 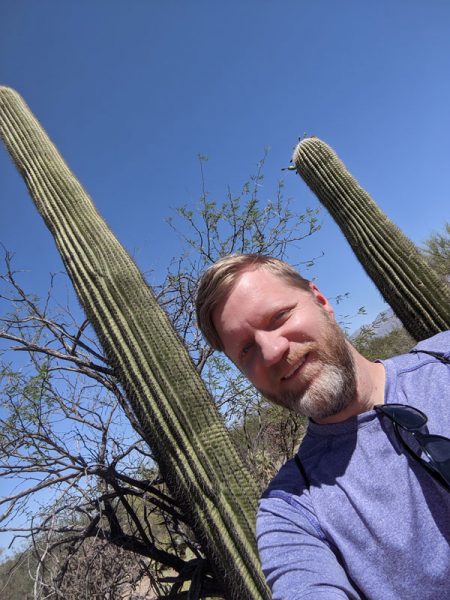 You may not think of El Paso as a major American metropolis, but this city on the Mexican border has a 700k population – more than Atlanta, Miami, Detroit, and Nashville. Ride the gondola to Ranger Peak, drive up Scenic Drive, and enjoy some of the best Tex-Mex cuisine in the country.

From El Paso, you’re looking at a 9-hour drive through nondescript in western and central Texas before reaching Austin.

We’ve already hit most of the major points of interest on the California to Texas road trip route, but there are a few others you may want to make a detour for.

Just 40 minutes outside of Vegas, the Hoover Dam has become an American landmark. You can view and take a tour of this remarkable feat of engineering on the Colorado River.

Everyone I know who’s visited Santa Fe has loved it. The colors, the food, the artsy vibe, the history… take the 1-hour drive from Albuquerque to see Santa Fe.

If you want to drive on historic Route 66, you can pick up a big chunk of it between L.A. and Albuquerque. Most of this stretch of Route 66 is now interstate highway, however, so you won’t get the same old-time feel that you get from driving Route 66 in Oklahoma, for instance.

This section of Route 66 will take you through Flagstaff, Arizona and Petrified Forest National Park, which are both worthy points of interest. And you can re-create the famous Eagles song by stopping by Standin’ On the Corner Park in Winslow, Arizona. 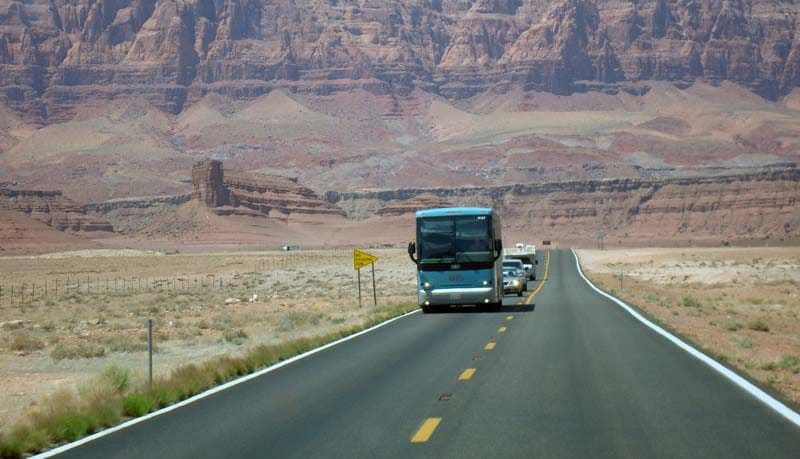 Three hours from El Paso sits the town of Marfa. The community of 1800 is known mostly for its artsy leanings, like the famous Prada store art installation.

Tucked away in the southwest corner of Texas, Big Bend requires a 2.5-hour detour off the fastest route between El Paso and Austin. Its remoteness means the crowds here are small. They mostly come for hiking and camping.

Which route would you choose to drive this Los Angeles to Austin road trip? 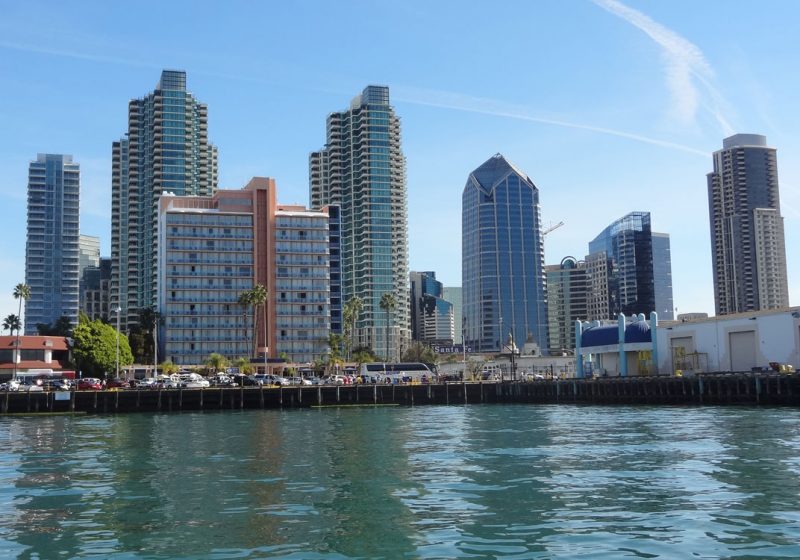 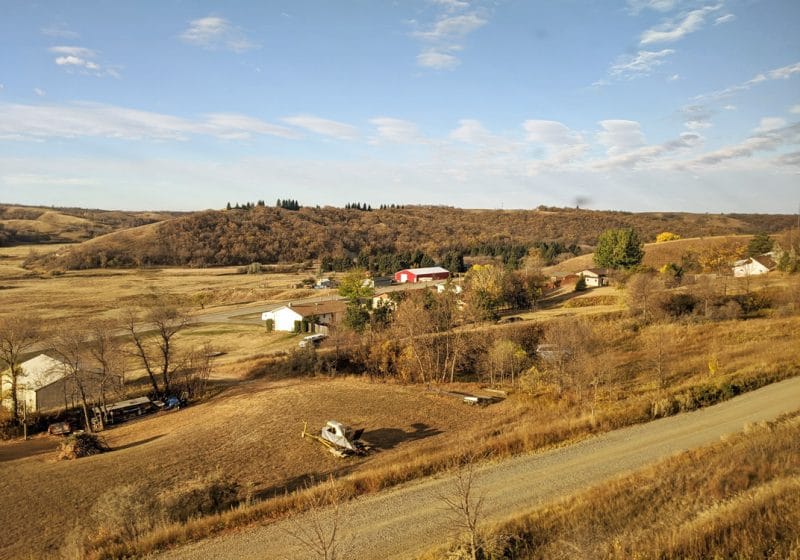 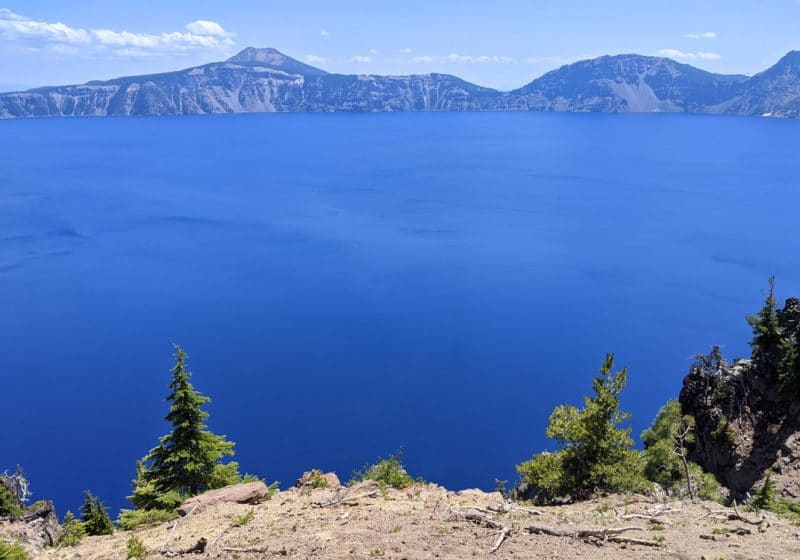